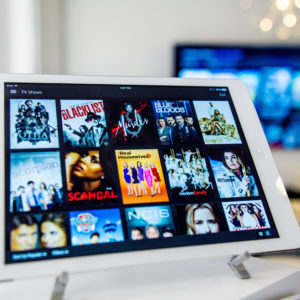 IMAGE DISTRIBUTED FOR COMCAST - Customers with the X1 DVR with cloud technology and live in-home streaming have more flexibility to watch their recordings anytime, anywhere via the Xfinity TV app. (Jeff Fusco/AP Images for Comcast)
News

Pay-TV providers have offered up more details about their plan to provide content on apps instead of set-top boxes, an effort designed to counter pending Federal Communications Commission rules that would force them to put their programming on third-party set-top boxes.

FCC Chairman Tom Wheeler criticized the pitch from Comcast, DirecTV, the National Cable and Telecommunications Association (NCTA) and others as a “one page … press release” earlier in July, though he and his fellow commissioners conceded it could have promise with further details.

NCTA provided those details to the agency late last week in a 33-page filing, submitted alongside more than 1,000 additional pages of technical specifications, that seeks to answer a batch of questions the agency reportedly drafted in response to the proposal.

“Our filing yesterday provides additional detail about HTML5 and suggests how the FCC can operationalize an apps-based approach that will advance the cause of retail device competition while respecting the rights of content creators and distributors,” NCTA said in a blog post Friday.

The plan would require pay-TV providers like Comcast and DirecTV, known to the FCC as Multichannel Video Programming Distributors (MVPDs), with at least one million subscribers to offer their content on HTML5-standard apps, like those used by popular streaming services Netflix and Hulu, within two years.

The apps won’t stream from the internet, but from dedicated IP channels “that match its purpose as a software replacement for the set-top box for use in the customer’s premises for delivery of a Title VI cable service (or MVPD service by satellite or IPTV operators).” However, they would function on third-party boxes capable of connecting to the internet and streaming other services like Hulu.

NCTA’s approach would give subscribers the choice to forego renting a set-top box to access content, a cost of $231 annually for the average U.S. household and a revenue stream of almost $20 billion for providers, according to a congressional survey cited in the FCC’s proposal.

“What the apps proposal will do is allow consumers to choose to watch their cable service without the need for a set-top box,” NCTA said. “What it will not and should not do is to permit third parties to ignore copyright law and the decision of content creators as to how their content is packaged and presented to consumers.”

While the plan satisfies the primary goal of the FCC’s rulemaking, it does not compel providers to offer DVR capability in their apps or allow potential third-party set-top box manufactures like Google and Roku to alter the information flows from providers, enabling them to unbundle provider interfaces and channel lineups and manipulate the presentation of the content to subscribers.

Providers could choose to offer recording capability in the apps of their own accord or put in place additional hardware requirements for DVR capability — like renting a box.

The FCC’s Notice of Proposed Rulemaking (NPRM) would force MVPDs to do it all — offer content on third-party platforms, unbundling and recording.

“MVPDs are currently investigating potential for local recording onto retail hard drives at the customer premises,” NCTA’s filing reads. “Content providers and MVPDs have raised serious and legitimate concerns about recording of content that is decoupled from an MVPD’s app because NPRM and ‘information flows’ proponents continue to insist that they are not and may not be bound by the agreed-upon terms for presentation and use of content contained in programmer MVPD programming and licensing agreements.”

Programmers and MVPDs say the FCC’s rules would allow Google and other third parties to manipulate content they don’t pay to license, presenting it based on theirs and users’ preferences, burying minority channels, undercutting programmers by selling their own advertising and making content downloaded onto their devices more susceptible to piracy.

NCTA added that unbundling information flows would push their already “aggressive” timetable of two years further back by forcing MVPDs to re-architect their networks and agree to a standard format for transmitting content. The FCC plan establishes a three year timetable for implementation, and offers no guidance on its mandate that providers agree to a single format — something they’re unlikely to do in a timely fashion, according to FCC Commissioner Ajit Pai.

Pai, one of the commission’s two Republicans, previously said that given the pace of technology and how quickly streaming and on-demand services have dominated the video market, the FCC’s rules are likely to be outdated by the time they’re implemented.

During a congressional oversight hearing in early July, all five commissioners agreed with a growing coalition of bipartisan lawmakers and programmers that the proposal raises copyright concerns, and needs more work.

“Some of the most problematic concerns that have been raised include the exposure of sensitive consumer data, protection of valuable programming content, the ability of small and rural MVPDs to comply with heavy-handed mandates, and the potential harm the rules would have on independent and minority programmers,” the Louisiana Republican wrote to the FCC.