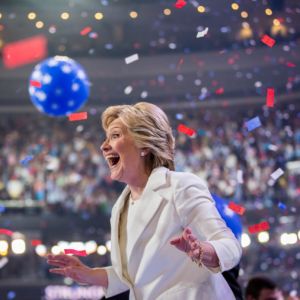 Can Clinton Really Win Over Republicans and Sanders Supporters?

Nicolle Wallace was the fly in the ointment.

While most of MSNBC praised Hillary Clinton’s speech accepting the Democratic presidential nomination Thursday night, the conservative commentator said the former secretary of state “squandered” her campaign’s week of outreach to Republicans with “a very partisan speech.”

After the Obamas welcomed conservatives into the Democratic tent with inclusivity and non-ideological indictment of Donald Trump, Wallace argued, Clinton offered the GOP “run-of-the-mill class warfare.”

She’s certainly right about this much: Clinton had an extraordinarily difficult needle to thread in Philadelphia, and it’s hard to imagine the Democrat didn’t prick herself with it at some point.

On the one hand, Clinton’s speech was, as multiple MSNBC pundits concluded, “a speech Bernie Sanders could have given.”

She went out of her way to court her former primary rival’s voters and shore up support on the left, offering more than a little evidence that she’s moved there on various issues.

“Bernie Sanders and I will work together to make college tuition free for the middle class and debt free for all,” she said, citing the marquee example of their coming together. “We will also liberate millions of people who already have student debt.”

Clinton also pledged to oppose “unfair trade deals,” tax the wealthy and usher in new economic stimulus along with a host of government programs from affordable child care to paid family leave.

Clinton is a liberal, and more importantly she’s increasingly running as one.

That’s going to make it harder for #NeverTrump Republicans to join her campaign, especially since many of them are ideologically to the right of the GOP nominee.

One potential opportunity is Republican women. According to Wallace’s fellow MSNBC conservative and compatriot from John McCain’s 2008 presidential campaign, Steve Schmidt, Clinton has a shot at married “security moms” if she can persuade them Trump is unfit to be commander in chief.

That’s key to the Democrat’s strategy. Like Lyndon Johnson running against Barry Goldwater, Clinton is arguing that American’s military arsenal in the hands of the bombastic businessman is a frightening prospect.

“A man you can bait with a tweet is not a man we can trust with nuclear weapons,” she said Thursday. “I can’t put it any better than Jackie Kennedy did after the Cuban Missile Crisis. She said that what worried President Kennedy during that very dangerous time was that a war might be started not by big men with self-control and restraint, but by little men, the ones moved by fear and pride.”

All of this should resonate with anti-Trump Republicans. They don’t need to be convinced of their nominee’s problems, and some may even prefer Clinton on these issues of stability and security. The question is whether they can abide such strong social liberalism as part of the package, and whether a diverse coalition of security moms and Bernie bros can ever really be sustained.