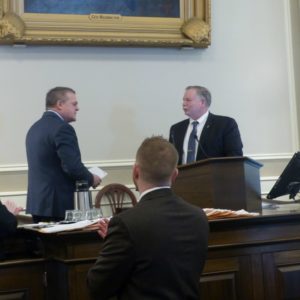 Chaos in the NH House: What Happened to the GOP State Budget?

For the first time since at least 1969, the New Hampshire House did not pass its version of a state budget. The budget is the second major issue that House Republicans had split factions on, highlighting deep and unhealed wounds within the Republican Party. While many people are putting the blame on Gov. Chris Sununu for not leading the party, he stands to gain the most from it.

House Speaker Shawn Jasper, R-Hudson, did not mince words after the House voted to adjourn and recess before a budget could be passed by the Thursday deadline. He blasted those who opposed the budget.

“They were bankrupt in terms of ideas,” said Jasper. “There were really no ideas that they had other than to say ‘somebody else needs to figure this out.’”

Yet, for keen political observers the ultimate failure of the state budget was predicated weeks ago, as conservative House members did not like that spending increased over former Democratic Gov. Maggie Hassan’s budget and that the budget created by the House Finance Committee lacked tax cuts.

Rep. J.R. Hoell, R-Dunbarton, is the leader of the House Freedom Caucus. He led the charge against the House Republican’s leadership budget. He tweeted about how he could “see trouble” getting the budget passed two weeks before the vote.

“The Speaker pulled me out of the budget hearing,” Hoell told New Hampshire Public Radio before the vote. “We sat in the back of the room and talked and I explained that some of us wanted to see tax cuts. There are no tax cuts in this budget. I’ve left it up to the Speaker whether he wants to play ball and make these changes or not. That’s entirely up to him.”

On Wednesday, the House failed to pass HB1 and HB2, which were created by the House Finance Committee and approved by the Republican leadership, by a 220-134 vote. After that budget was voted down, conservatives attempted to cobble together in an amendment their version of a budget, but that also failed on a 282-76 vote. House Democrats offered their own plan, but it lost by 34 votes, the closest any budget came to passing that day. The final vote was 196-162. The House then tabled the budget bill and recessed until Thursday morning.

A Wednesday deadline for new amendments to be brought forward to the state budget debate saw six amendments filed, yet none from House Republican leadership. They said it would be “disrespectful” to change the hard work and time the Finance Committee put in to create the budget.

When the House reconvened on Thursday, a trailer bill that accompanied the budget proposed by the finance committee failed, and the leadership saw no possible way they could get a budget passed, so they voted to recess, essentially not giving a budget to the Senate to work on.

Jasper condemned the 32-member conservative caucus who voted against the budget.

Yet, Jasper wanted to quell fears about the implication of the House not passing a budget.

“Don’t worry,” he said. “This is a step in the process, and while it is unusual, it really doesn’t affect anybody in the state because the Senate is going to move forward with their proposal.”

The Senate Finance Committee will begin drafting its version of a state budget on Monday, launching a weeks-long process of hearings and meetings before they present it to the full Senate for a vote. Senate GOP leaders said they will use Sununu’s budget proposal as a base and have also invited House Finance Committee members to present their plan, so they aren’t completely shut out of the process.

There were outside groups influencing representatives before the state budget vote this week. It wasn’t the usual dark money organizations that try to sway elections. It was former House Speaker William O’Brien. Jasper defeated him in the 2014 speaker race with the help of the entire Democratic caucus. O’Brien was in contact with several conservative members ahead of the budget vote, encouraging them to vote their conscience.

“You have the critical mass to require a budget that fulfills the commitment that the NH Republican Party has made in its platform to: ‘[l]imit the growth of state spending to not more than the rate of inflation plus population growth.'” He wrote in an email to representatives. “If you ignore the threats, warnings, and ultimatums, and if you stand together and tough, you will prevail.”

After the budget failed, O’Brien sent a congratulatory email to members who voted against the budget and trailer bill.

“I don’t want to talk about individuals,” Jasper said when asked about whether O’Brien influenced the state budget vote. “But there were clearly outside influences who were ginning up members to vote no. There’s no question about that, and that’s unfortunate.”

With the recent budget failure, this marks the second important issue Jasper failed to get through the House. Right-to-work legislation, which Sununu called a top priority for the state, failed earlier this year in the House after moderate Republicans sided with Democrats to kill the bill.

With a 53-member majority, Jasper shouldn’t have that much of an issue getting bills passed, and if he can’t keep his party unified, there could be calls for him to resign as speaker in favor of someone else.

Rep. Laurie Sanborn, R-Bedford, challenged Jasper for the speakership in November, but lost. She’s a member of the conservative House Republican Alliance who voted against the leadership budget on Wednesday, but voted in favor of the trailer bill on Thursday.

“Unfortunately, we were shut down in many steps in the process,” she told WMUR. “I think we could have come up with a way to pass a Republican budget, and, unfortunately, that debate was shut down.”

She has no intention of challenging Jasper, but said she has heard from people who are not too happy with how Jasper is doing as speaker.

“Many folks are concerned about the leadership’s style because there’s a feeling that there hasn’t been a lot of give and take and listening, and they’d like to see more of that,” she said. “I’m hoping the speaker listens and learns from this experience so we can get together to get one Republican budget accomplished this year.”

While fingers were pointed at Jasper for the budget failure, Democrats were quick to cast blame on Sununu for not effectively leading his party and getting a budget passed.

“[Sununu] has chosen to threaten rather than build coalitions, stay silent rather than making his opinions known, and stay distant rather making his presence felt,” said New Hampshire Democratic Party Chairman Ray Buckley in a statement. “His sense of entitlement has led him to expect support rather than work for it. Sununu was supposed to be the leader of the party; instead, the tail is wagging the dog.”

Even Jasper said he didn’t want to comment on Sununu’s involvement in getting the budget passed.

“With all due respect I’m just going to keep my thoughts on that to myself,” he said. “I have enjoyed my working relationship with the governor. He did come into our caucus twice and I’m going to leave it with that.”

Yet, in a statement from the governor’s office, it appears Sununu is putting the budget failure in the hands of House leadership.

“While I’m disappointed that House leadership couldn’t get a budget passed today, I am encouraged that the Senate has moved swiftly to take up my budget as a starting point for their deliberations,” he said.

Although Sununu is essentially the face and leader of the Republican Party, he might actually end up getting what he originally wanted.

The House version of the state budget cut his full-day kindergarten proposal, scholarship fund, and funding for the Alcohol Fund. Those were key priorities he made during his budget speech in February.

Now, the Senate said they will use his budget proposal as a starting point and they’ve already passed a number of bills on issues related to Sununu’s budget priorities, which indicates they’re more likely to include several of the governor’s wish list items.

While Democrats are trying to paint Sununu as the loser of this budget battle, he actually poises as a potential winner for not having his budget slashed…yet.