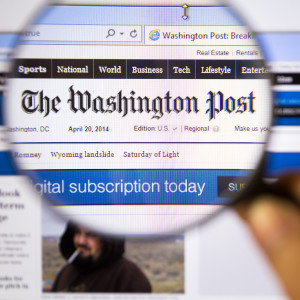 Why Conservatives Get Mad at the Mainstream Media

Liberal media bias in the coverage of events and people by the mainstream press.

It is an ongoing feature in modern-American politics that rears its head every day and consistently draws the ire of Conservatives. Look no further than recent coverage of a terrible shooting in North Carolina or the slaughtering of Christians in the Middle East.

Across the board, the mainstream media denies this bias is real, pointing out how truly radical organizations accuse the mainstream media of actually having a conservative bias. They then pat themselves on the back, claiming attacks from both sides must mean they are essentially fair and unbiased.

The number of media outlets who even claim to be mainstream in the sense of practicing objective journalism – The New York Times, CBS, Washington Post, Associated Press – becomes fewer in number each year. Still, these established brands undoubtedly establish the starting point for the discussion of events and people.

As much as anything, it helps create the basis for conservatives to grind their teeth when reading the paper or watching the evening news. What is included, omitted, and the treatment given to things all fail the test of being ideologically neutral. Venues such as studentnewsdaily.com provide ample evidence the coverage is indeed slanted in a direction that favors liberals.

To conservatives, content analysis that “proves” the mainstream media has a liberal bias is along the lines of observing the sun rises in the east. To show how real and tangible this bias is, let us do no more than look at events of the past couple of weeks.

In North Carolina, a lunatic murdered three people over a parking place. That the murderer is crazy at this point should be obvious even to those with an agenda. When you read the mainstream media, however, you mainly hear that the victims were Muslims.

Other Muslims, including some in the family of the victims, instantly claimed – despite any proof – the murders were the result of anger directed at the victims because of their religion. The murderer was of course a self-described liberal, atheist. The impression left by the words on the pages of mainstream media outlets was there was plenty of evidence the murders were hate crimes with the unstated inference this was another of right-wing zealots who did it. The President of the United States saw fit to tell Americans that targeting people based on their religion was wrong. Of course, the facts indicating nothing of this sort actually happened were of little interest to the mainstream media.

Over the weekend, we had two incidents of Islamic terrorists killing innocent civilians. One occurred in Europe during an event to celebrate free speech. In the past, any threat to free speech was met with an instant criticism from the mainstream media. No longer. Now, the mainstream media wonders aloud about speech that offends.

None of this should surprise anyone. After all, when the press secretary to the President claimed that the victims of the assault on a kosher deli in Paris were “random” and not targeted for their religion, the media gave the ridiculous declaration scant attention. As anyone who pays attention can note, even in New York City, those who go to kosher delis are hardly random in their composition. They are overwhelmingly Jewish.

Separately, when Michael Bloomberg went to the Aspen Institute—where the rich and elite gather to agree to agree with each other—he uttered words that would have been on the front page if any prominent conservative uttered them. In discussing gun violence, “Bloomberg claimed that 95 percent of murders fall into a specific category: male, minority, and between the ages of 15 and 25,” the Aspen Times reported. Bloomberg said “cities need to get guns out this group’s hands and keep them alive.” Be honest. How much coverage have you seen on this?

When it was “revealed” that House Majority Leader Scalise had made remarks to a racist group many years ago, it was front-page news for days. Not only that, every conservative had to disavow what Scalise had done or be guilty of “tolerating dangerous racist behavior in their ranks.”

What does the Washington Post have to say about issues surrounding the funding of the Department of Homeland Security? Well, it is quite predictable.

The House passed a bill that included de-funding President Obama’s immigration policy. It has the votes to pass in the Senate, but the Democratic minority is using the threat of filibuster to block a vote in the upper chamber. Is the problem that Democrats in the Senate refuse to accept the results of the 2014 election or understand they are the minority—a description used without fail when Republicans were in the minority in the Senate? Of course it is not. The problem is that Republicans have put keeping Homeland Security funded and open for business at risk with their insistence to include the language on immigration. Republicans should present a clean bill with no qualifications says the Post. Yet when Republicans argued last year that to keep the government open, Congress should vote on a clean bill with no changes in sequestration, the Post felt Republicans should cave and accept as the minority in the Senate they had no right to insist on anything.

There is a reason conservatives complain there is a liberal bias that is unrelenting within the mainstream media – there is.