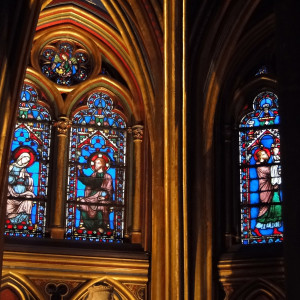 If the quarrel between the majority of U.S. Episcopalians and the majority in the wider Anglican Communion has long since grown tiresome, perhaps it is refreshing to consider the ideals of the young, the y and z generations. For most young adults, LGBT inclusion is a no-brainer, even if the way this gets worked out requires some reflective and in many ways unresolved labor.

But other, more basic ideals animate the hearts and minds of the young, like global truth and reconciliation, incorporating racial, cultural, and economic justice. What college student has considered the prospect of something like a “civilization of love,” in the phrase of Pope John Paul II, and not thought sign me up? The cause of social justice, nourished by the conscientious call of solidarity, explains the wide support for Bernie Sanders, who captured 85 percent of the votes of Democratic Iowa caucus-goers younger than 30.

In precisely this idealistic vein, I give you the would-be Anglican Communion: a collocation of Christians, putatively the third-largest in the world — 85 million in over 165 countries, spanning a great diversity of class, ethnicity, and language — striving to receive the gift and answer the upward call of unity in Christ, not as an end in itself but as a means of wider communion among all Christians, so that the world may see and know the love of God.

Josiah Idowu-Fearon, secretary general of the Anglican Communion (and the first African to serve in that office), emphasized just this point in his recent comments after the January meeting of Anglican primates in Canterbury. “The churches of the Anglican Communion in clumsy, inarticulate, and imperfect ways love each other,” he said. How so? “When Christians are unable to agree with one another, yet choose communion, refusing to say ‘I have no need of you,’ we bear evangelical witness to the One through whom God was pleased to reconcile all things to himself by making peace through the blood of his cross.”

Many have bridled at the primates’ challenge to the maverick Episcopal Church to be a team player, that is, not to act unilaterally in areas of common concern. The primates’ attempt at discipline, it is objected, was both clumsy and authoritarian, pushing in the opposite direction of possibly prophetic witness. But surely, as Idowu-Fearon said, one may admire the way that Episcopalians have “stood up for the rights of gay and lesbian people here and around the world” and still struggle with American self-regard and its powerful, often overwhelming expression.

The meeting of primates coincided with President Obama’s final State of the Union address, in which he noted: “The United States of America is the most powerful nation on Earth. Period. Period. It’s not even close. … We spend more on our military than the next eight nations combined. Our troops are the finest fighting force in the history of the world.” How do leaders around the world hear this, including Anglican archbishops, the majority of whom hail from non-Western, often very poor nations?

America has set historic precedents, above all as the banner-bearer of modern constitutional democracy. Our national experiment in harmony among peoples, writ as the welcome and integration of all irrespective of race and religion, remains a work in progress, to put it mildly. And one may suppose we have too often been exceptional abroad in the wrong way, placing profit before justice for the poor and vulnerable. Have we come even close to the stringent standards of the Christian gospel (see Phil. 2)?

Of course, the state is not the Church. But truth provides a measuring rod, and a correction and judgment, for all nations complicit in the false gospel of fraud, abuse, and money laundering that is so often the currency of unregulated and exploitative capitalism. Here, as elsewhere, a measure of Bernie Sanders, with a pinch or more of Pope Francis, could go a long way to cure American myopia.

The common life of Anglicans remains a rollicking adventure, capable of shaking the foundations of the world on the way to glorious reconstruction. The price of admission, the sacrifice, is “a troubled spirit: a broken and contrite heart” (Psalm 51:17), as liturgical Christians will pray this Lent. If, in the giving of our gifts to God and to one another, we find that we need to turn from the altar of wealth and influence and first be reconciled to our sister and brother, then let us be about this holy work. In it is true freedom.

Dr. Christopher Wells is Executive Director and Editor of the Living Church Foundation.