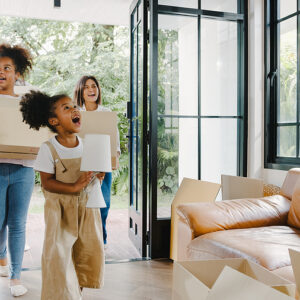 This October marks the 44th anniversary of the Community Reinvestment Act, or CRA.

The CRA was designed to reduce the lending discrimination that’s left many Black and Brown neighborhoods impoverished. Unfortunately, there hasn’t been a reduction in racial economic inequality — but if we can get the law to explicitly consider race, we can change that.

Now, as the Federal Reserve looks to modernize the law, one thing is clear: The racial blindfolds of the CRA must be removed.

The CRA was one of several important pieces of legislation passed in the 1960s and ’70s to address racial economic inequality. All focused on reducing discrimination, but none did enough to affirmatively improve equality.

One of these was the Fair Housing Act, passed in 1968 to address housing discrimination and, in turn, advance Black homeownership. It failed, wrote urban anthropologist Fred McGhee 50 years later, “because of its race and class neutrality.”

“Perhaps the single most important lesson the past 50 years should have taught us,” he continued, is that “we cannot fix discrimination in housing via an anti-discrimination framework. Conscious race and class measures are needed that tackle the inherent problems of American inequality at their root.”

The Community Reinvestment Act, passed in 1977, was designed to go beyond simply preventing discriminatory lending practices. It was written to encourage investment in all communities. But while the law targeted low- to moderate-income neighborhoods explicitly, it did not explicitly address racial economic inequality.

That leads to lower net worth for Black families — and to lower revenues for Black-owned businesses.

In 2019, median Black wealth was just $9,000, compared to $160,000 for median White wealth. And despite an almost threefold increase in Black businesses, African-American business revenue actually declined as a share of total revenue — from 1 percent to just 0.5 percent —  from 1992 to 2012.

This wealth inequality comes from historical discrimination and exploitation. And asset poverty re-enforces itself in our current financing system, where few financial products or investments are designed to address the low wealth reality of African-Americans, as well as Latinos or Native Americans.

Much more needs to be done to build wealth for Black families and other historically excluded groups. A good first step would be explicitly including race in the CRA.

“The explicit inclusion of race in the CRA offers us an opportunity to correct these government and market failures,” wrote longtime fair housing advocate Stella Adams over a decade ago. That “would allow us to do more than just reduce the concentration of poverty and spatial isolation in neighborhoods of color. It would allow us to create opportunities for building real transgenerational wealth for minority families.”

The National Community Reinvestment Coalition recently partnered with Relman Colfax on a new paper to outline some ways to do that.

The paper also calls for “creating full-time research positions dedicated to studying the racial components of banks’ varying performance contexts,” something already being done by the Federal Reserve Bank of San Francisco. Also, in selecting assessment areas for CRA review, racial inclusion should be a factor to ensure that minority areas are not excluded.

Finally, banks should be required to work with organizations serving neighborhoods of color when developing a strategic plan for the Community Reinvestment Act.

Legislation designed simply to reduce discrimination must be transformed into legislation that economically advances communities that have been historically — and are currently — marginalized. Modernizing the CRA to include race-conscious provisions is a critical step that can help move the country in the right direction.

Dedrick Asante-Muhammad is the chief of Membership, Policy, and Equity at the National Community Reinvestment Coalition and an associate fellow of the Institute for Policy Studies. He wrote this for InsideSources.com.