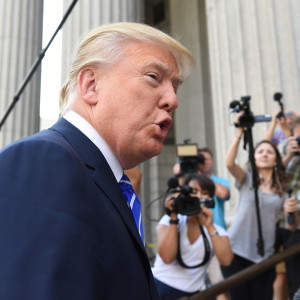 Counterpoint: Trump Remains Out of Step with Majority of Americans

Editor’s Note: For an alternative viewpoint, see: Point: Americans Are Afraid and Irritated

From the minute Donald Trump announced his candidacy by declaring that Mexicans are criminals and rapists, many political pundits and progressive advocates have been waiting for his demise. But six months later, his inflammatory and often insulting rhetoric — which would have once been considered unimaginable in mainstream presidential politics — has become routine. We’re still waiting for the other shoe to drop.

Since soon after announcing his candidacy, Trump has led almost every national poll — including averaging 32 percent support among GOP primary voters over the last month. But when Trump proposed “a complete shutdown” of immigration by Muslims — the very definition of extremism that is out of step with America’s values and interests — many believed Trump’s rhetoric had gone too far, marking the beginning of the end for the GOP frontrunner’s bid for the White House.

But, despite the polls, Trump’s extended stay as the frontrunner for the GOP nomination says a lot more about the conservative primary electorate than it does about the American people as a whole. Trump’s top-line poll numbers, which are so vigorously reported and trumpeted by him, do not give neither a full nor accurate picture of his popularity.

The reality is, Trump supporters, however loyal they may be and however strong they may seem in early primary polls, represent only a small subset of the population. Even most Republican primary voters — almost 60 percent — say they would choose another Republican presidential candidate over Trump. A split GOP field has fragmented that support, but early primaries will likely shrink the number of candidates and allow others to compete directly against Trump.

In addition, as columnist E.J. Dionne explained, Trump supporters make up only a fraction of those surveyed in most national polls, a small percentage of the actual American electorate. “But it also matters that Republican primary voters constituted only 38 percent of those interviewed by the Times/CBS pollsters,” Dionne writes. “If you take 35 percent of 38 percent, you are talking about 13 percent of Americans.”

It isn’t just the data that explains why Trump’s big lead in the GOP primary isn’t a reflection of the nation as a whole. In fact, this kind of conservative streak historically has not helped GOP candidates, as the last two winners of the Iowa caucus — Mike Huckabee and Rick Santorum — eventually became afterthoughts in the nomination process and certainly the general election.

Donald Trump’s supporters may relish the idea that he is not a typical politician and argues against political correctness, but it is that attitude that has divided him from the rest of America. His offensive positions on immigration, partnered with his anti-Latino and anti-immigrant rhetoric, have been consistent throughout Trump’s outlandish campaign. He continues to go down this path either ignorant or dismissive of what today’s American communities actually look like.

In 2012, Latino voters, 71 percent of whom supported President Obama, created a firewall for Democrats in key states. And Latino voters are poised to play an even larger role in the 2016 election. In Nevada, where the most recent GOP primary debate took place, Latino voters could make up more than a fifth of all voters.

In a recent poll, more than three-fourths of Latino voters viewed Trump as unfavorable, which means that the power of the Latino vote could spell trouble for Trump’s candidacy. And Trump’s extreme position on immigration may hurt him with not only Latino voters: A vast majority of all Americans — 69 percent — think unauthorized immigrants currently living in the United States should be allowed to stay in the country.

Trump wasn’t the first GOP candidate to have a xenophobic position on immigration, and he isn’t alone in his hateful rhetoric that singles out specific communities. This may be Trump’s strategy for winning the Republican nomination, but it’s a strategy that will ultimately lead Republicans away from winning the general election.

While Trump faces a demographic roadblock to the presidency, it is one of his own building. Fortunately, it is only a reflection on Trump and his constituency of one, and not on the views of the majority of Americans.

Angela Maria Kelley is the executive director of the Center for American Progress Action Fund.