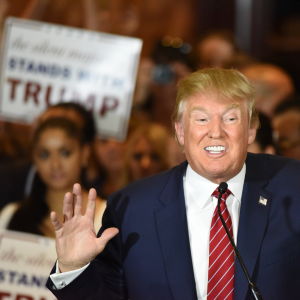 Point: Americans Are Afraid and Irritated

Editor’s Note: For an alternative viewpoint, see: Counterpoint: Trump Remains Out of Step with Majority of Americans

Watching Donald Trump campaign for the presidency is like watching the Titanic repeatedly hit an iceberg. But not only does this Titanic never sink, it never even takes on water.

Just a couple of weeks ago, Trump called for “a total and complete shutdown of Muslims entering the United States …”

This came as no surprise, given his previous calls for surveillance of American mosques and tracking of all Muslims living in the United States. What did this display of xenophobia get him? An eight-point jump in the polls.

Trump commented on candidate Carly Fiorina’s looks and Fox commentator Megyn Kelly’s menstrual cycle. He even said that were she not his daughter, he might have dated Ivanka Trump. Misogyny is apparently no problem for him either. What’s clear is that the usual rules do not apply to Donald Trump. His opponents ignore this at their peril.

But what does his time atop the polls say about the voters? The answer should be clear: Americans are afraid and irritated — about a lot of things. Mostly they are becoming increasingly concerned that no one is driving this bus. And the more Trump looks like he is ready to take the wheel, the more people are willing to let him say, and presumably do, just about anything he wants.

None of this has happened in a vacuum. President Obama has had seven years to realize the hope and change that he promised: to get us out of the Mideast, to shut down Guantanamo, to rein in the cost of health care, to bring back the middle class, to make government transparent. In place of all these promises, America got a president who appears to be wholly incapable of actually doing his job.

In his two terms of office, the president hasn’t yet figured out how to govern. He orders, he whines, he castigates, but he doesn’t work with the other co-equal branches. He works despite them. That’s the hallmark of a despot, not a president.

And does anyone really think that Hillary Clinton will be any different, or any better? At the climax of her career as secretary of state — the attack on our Libyan facility — Clinton was asleep at her wheel. Our military knew that the U.S. personnel needed immediate help. Clinton did nothing. As our ambassador was hauled out, beaten and killed, Clinton did nothing.

In the days after the murder of our country’s official representative, both President Obama and Secretary Clinton blamed a YouTube video. And why not? President Obama spent his first four years blaming George W. Bush for everything that went wrong on his own watch. Nothing is ever this president’s fault. The buck just never stops, and Americans are tired of it.

What Trump’s popularity says about America is that a growing number of voters think that the government is out of control. Many voters believe that getting someone’s — anyone’s — hand on the wheel would be better than careening along as history unfolds.

If that someone happens to be boorish, impolite, mean-spirited, blunt to a fault, and egotistical beyond measure, no matter. It might even be better. At least there is the off-chance at honesty.

Donald Trump is simply willing to say what a good part of the electorate wants to hear, and for once, this is not a simplistic list of policy prescriptions or promises of “free” things that the government will dole out during his administration. He is willing to say that radical Islam is a problem (whether it is or not) at a time when the president refuses even to use the term.

Indeed, President Obama has blamed global warming for the dangerous ideologies that bring terrorism to our doorstep, while blaming the recent terrorist attack in San Bernardino on lax gun control. No matter how many ridiculous things escape Trump’s lips, they are not this ridiculous, and therein lies the key to understanding him and his appeal. He begins by telling the people they are right and that someone needs to do something, rather than by telling them they are wrong and they need to change their minds.

Americans are sick of politicians, but they have always been. The difference is that Americans are coming to believe that they have had years of politicians’ running for office, even as none actually ran their offices. This vacuum has made Trump possible. A broken political class has handed Trump this opportunity. And he is just shrewd enough to act on it.

Editor’s Note: The assertion that the U.S. ambassador suffered a beating has never been substantiated. The official ruling is that he died of smoke inhalation and had no other injuries.