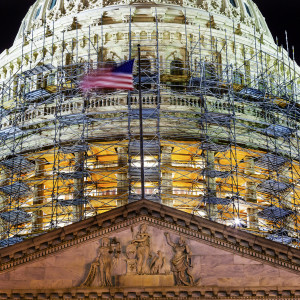 Riders blocking net neutrality never made it into Congress’ $1.1 trillion omnibus, but Republicans weren’t willing to relinquish all of their Internet issues from the last-minute funding bill, including blocking the U.S.’s handoff of oversight over the Internet’s domain name authority.

In March 2014, the Obama administration announced its intention to transfer authority over the Internet’s Domain Name Authority (DNS) — the digital backbone of the Internet — to the global community.

Since the inception of the modern Internet in the ’90s, the Internet Assigned Numbers Authority (IANA), housed within the non-profit Internet Corporation for Assigned Names and Numbers (ICANN), has overseen the top of the DNS tree under the National Telecommunications and Information Administration (NTIA) within the Commerce Department.

IANA essentially maintains the roadmap of the Internet, assigning the Internet Protocol (IP) addresses that guide Internet-connected devices to websites. ICANN has overseen IANA in a widely recognized unbiased manner with little scrutiny from the global community, outside of the fact the U.S. — as the developer of the Internet — maintains oversight, despite the web’s global expansion.

That changed in the aftermath of intelligence leaks revealing mass Internet surveillance programs by National Security Agency whistleblower Edward Snowden in 2013. Though unrelated from a technical standpoint, the White House’s announcement to hand over the IANA oversight has largely been seen as a concession to the global community.

Republicans in Congress have criticized the proposal over concerns states like China and Russia could use the opportunity to compromise Internet security and website authenticity for profit and censorship. Some speculated it could even lead to countries establishing their own proprietary Internet, or establishing global Internet taxes for connectivity and access.

They’ve since passed a slew of legislation establishing standards to ensure a secure transition framework to an unbiased global entity, and numerous deadline extensions to that end.

The latest came in the form of Speaker Paul Ryan’s omnibus, which pushes the transition, expected not to take place until late 2016, into fiscal year 2017.

“None of the funds made available by this act may be used to relinquish the responsibility of the National Telecommunications and Information Administration, during fiscal year 2016, with respect to Internet domain name system functions, including responsibility with respect to the authoritative root zone file and the Internet Assigned Numbers Authority functions,” the bill states on page 221.

“Nothwithstanding any other law, subsection (a) of this section shall not apply in fiscal year 2017.”

Republicans included a similar provision in last year’s omnibus bill that delayed transition until Sept. 30, 2015. The non-profit has already renewed its contract with the NTIA until next fall, with the expectation it will take at least that long to implement a complete plan.

ICANN released a draft of its plan in August, written to address Republican concerns by prohibiting any foreign government from extending oversight.

Lawmakers in the House addressed those concerns themselves earlier this year with the passage of the Domain Openness Through Continued Oversight Matters (DOTCOM) Act, which prevents NTIA from agreeing to a transition until after the Government Accountability Office (GAO) submits a report to Congress about the risks, advantages, disadvantages and also proposes safeguards for the deal.

The bill is awaiting action in the Senate.