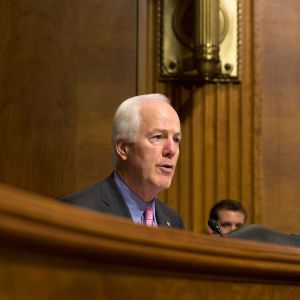 The Capitol Hill battle over controversial EB-5 immigration visas intensified on Wednesday, with the senior Texas senator and a Dallas developer right there in the thick of it.

Civitas Capital CEO Daniel Healy was summoned to the Senate by its No. 2 Republican, Majority Whip John Cornyn, to testify on the special federal program designed to grant wealthy foreigners U.S. visas for investing $500,000 in poor, underdeveloped areas of America.

Some experts and lawmakers call this an oft-abused initiative, which ends up benefiting affluent enclaves overwhelmingly. Healy, whose business partner G. Brint Ryan recently held a fundraiser for Cornyn in Dallas, has used EB-5 to raise $500 million at Civitas for tony development in and around the city’s downtown.

The CEO spoke to the Judiciary Committee on the heels of a failed congressional reform effort in December, pitching a plan to “radically reform” the state-designated “target employment areas” where low-cost investment flows.

Committee Chairman Chuck Grassley, an Iowa Republican, said TEAs “are at the heart of the controversy over EB-5,” specifically because of how they’re drawn. They often “include long-chain census tracts, linking the affluent area at one end with the least affluent census tract, perhaps many miles away, that include low-income residents or subsidized housing.”

Grassley was hardly alone in criticizing this “gerrymandering” at the hearing — and the bashing was bipartisan.

Ranking Member Patrick Leahy, a Vermont Democrat, called TEAs “an unintended boon for some of the wealthiest business districts,” under which “Beverly Hills can be considered just as distressed as Detroit.” He cited the Wall Street Journal quoting one developer who referred to EB-5 financing as “legalized crack cocaine.”

Healy said the solution is to emulate the New Markets Tax Credit Program, another federal initiative aimed at boosting low-income areas. He argued that program’s criteria for what constitutes a place in need — median family income not exceeding 60 percent of statewide median, for example — could be replicated and enforced.

That “may be a better approach,” agreed Gary Friedland, a scholar-in-residence at the New York University Stern School of Business, who testified alongside Healy.

Although every lawmaker at the hearing voiced support for reform, fault lines did emerge in debate over where to direct money.

“There seems to be a suggestion that rural investments are inherently virtuous whereas urban investments are not,” Cornyn said. As an example of a rural area where investment might not be practical, the senator pointed to Loving County, Texas, with a total population of 82.

“More cows than people,” he said. “If the federal government were to somehow write criteria that would only allow EB-5 investment as long as that investment would go in Loving County, Texas, would it attract any investment at all?”

Cornyn and Democratic New York Sen. Chuck Schumer are backing a reform bill from Arizona Republican Sen. Jeff Flake, and they’re both pushing more of a focus on cities.

Schumer said Flake’s legislation would “sail through the Senate like a knife through butter,” but called the idea that development in affluent areas doesn’t help poor people “bunk.”

“It’s a self-serving argument to see all of the money go to some parts of the country and not to others,” he said. “I won’t stand for it.”

After Grassley inveighed against “glitzy hotels and luxury condo projects,” Schumer asked, “Where do you think people in the South Bronx, the poorest congressional district in the country, work?”

“They don’t work in their district, in their census tract,” he added. “They get on the subway and go to an office tower, and they either clean it or serve food or do administrative work. … Our office towers are our factories.”

Schumer called on Grassley and Leahy to compromise with him and Cornyn, even evoking the Beatles song “We Can Work It Out,” but the chairman wasn’t convinced. He asked why New York wouldn’t want to build up its impoverished areas like the Bronx.

“It’s not how cities work,” Schumer shot back.

For his part, Leahy sounded committed to a more hard-line stance on EB-5 changes. “The program is in need of a blood transfusion, not a band aid,” he said.