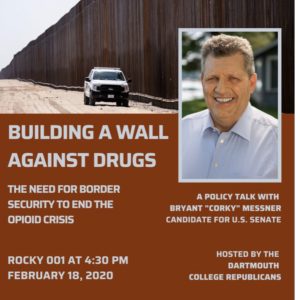 A policy talk sponsored by the Dartmouth College Republicans on New Hampshire’s opioid crisis and the need for border security has been indefinitely postponed due to security concerns over a possible violent response by left-wing campus activists.

Republican U.S. Senate candidate Corky Messner was scheduled to deliver the talk, entitled “Building a Wall Against Drugs: The Need for Border Security to End the Opioid Crisis,” on Tuesday afternoon in the Rockefeller Center on Dartmouth’s campus. But after angry blowback from students and threats of violence directed toward the Dartmouth College Republicans, the group decided to postpone the event over security concerns.

“The security risk has outpaced our capacity to handle the potential protests. Given the reaction and the subject matter [border security], and the threats against our members, we’re facing a security problem bigger than we can handle,” Dartmouth College Republican’s Chairman Daniel Bring told NHJournal. “There’s a large contingent of radical leftists on campus who have descended on events in the past in order to shut down speech they don’t agree with. They pound on doors, rush the podium and harass the speakers.

“The backlash has been so great, we’re not prepared to say we will have the necessary security,” Bring said. He pointed to the harassment of conservative filmmaker Dinesh D’Souza and his daughter during a campus appearance last February.

Dartmouth College Democrats Communications Director Katie Smith told  NHJournal: “When the College Republicans encounter pushback for hosting racist events, they cry censorship. It is not censorship to call out racism when you see it. We encourage everyone to use their right to free speech to voice their opinion on the matter.”

The College Democrats also issued a statement, denouncing the “xenophobia and racism” of the event, saying they “unequivocally condemn this illegitimate excuse for a ‘policy talk.’ We won’t stand for the racism and  anti-immigrant policies propagated by Corky Messner and endorsed by the Dartmouth College Republicans.”

Other opponents of the Messner event took to Twitter:

“the college republicans can — and I cannot stress this enough — f*** off,” tweeted a member of the Dartmouth class of 2023.

“I say dartmouth twitter should band together and jump the college republicans for that email/event. im sure none of them can fight,” another commenter said, who also tweeted out an invitation to a counter-event by progressive campus activist groups.

Bring says that his membership has received specific threats and they have informed both campus security and Hanover police.

“It’s not just a single comment here or there, it’s the wider situation and the threat of radical, intense protests.”

Griffin Mackey, secretary of Dartmouth College Republicans, told NHJournal that members had heard threats directed at both the College Republicans and at Messner. “We don’t know if they were serious or not, but our first priority has to be an event that’s safe and where people who want to hear our speaker feel welcome.”

Mackey says their audience included members of the Hanover community, not just students, and he was concerned about some of the tactics College Democrats have used in the past.

The border security debate is a particularly passionate topic at Dartmouth given the recent vote by the Hanover Selectboard to consider a resolution that would have the effect of declaring the town a “sanctuary city” for illegal immigrants. A significant number of Dartmouth students attended the hearing in support of the measure.

“I’ve visited college campuses across the Granite State during my U.S. Senate campaign, and while I welcome these opportunities, too often I’ve encountered situations where the healthy exchange of ideas is discouraged by those who apparently feel threatened by even the existence of opposing viewpoints,” Messner told NHJournal.

“The situation at Dartmouth College is the most egregious example I’ve encountered of this intellectual intolerance. Thanks to the efforts of those agitators who disagree with the planned event topic — the mere topic itself, mind you — we are denied the right to assemble, the right to listen to others’ viewpoints — to even express ourselves,” he said. “Ironically, freedom of speech is demonized at an institution of higher learning, where expression and exploration of ideas should be exalted, not stamped out.”

Violent protests targeting conservatives have become commonplace on American campuses, particularly at Ivy League and elite private academies dominated by progressives. At Middlebury College, a professor was injured by a campus mob protesting a speech by sociologist Charles Murray.

Riots and violence have broken out at Berkeley College in attempts to silence speakers invited by campus Republicans or conservative organizations. Brandeis University withdrew an honorary degree offered to woman’s rights activist Ayaan Hirsi Ali — a survivor of female genital mutilation and critic of Islam — under pressure from campus progressives.

The New Hampshire Federation of College Republicans issued a statement calling the threats to Dartmouth Republicans “an insult to the First Amendment.”

“The right to freedom of speech and thought is a unique value in our society that is increasingly under attack from the far left, especially on our college campuses. This type of behavior should not be tolerated by Dartmouth College or its administration — it’s time for colleges and universities to stand up and denounce this type of egregious behavior by their extreme left students.”