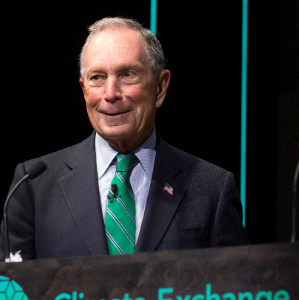 For Michael Bloomberg, debate night in Las Vegas was one to forget. Bumbling his way through responses and savaged by the competition, Bloomberg came across ill-prepared for prime time — and that was before the media roasted him the morning after.

Apparently, there’s a limit to what money can buy, although Bloomberg will keep spending his money nonetheless. To date, the Bloomberg campaign has dished out more than $400 million on political advertising — more than double the next largest spender, fellow billionaire Tom Steyer. When it’s all said and done, Bloomberg may spend more than $1 billion in personal funds to take down President Trump.

Emphasis on the word “done.” Because that’s what Bloomberg is, whether he acknowledges it on Super Tuesday or drags it out. Done. Finished. Kaput.

Despite his spending spree, the former New York mayor — Mr. “Stop-and-Frisk” himself — currently checks in at fourth in the New York Times’ national polling average, behind even the imploding Elizabeth Warren campaign. In terms of news coverage generated, Bloomberg sits in sixth. And Las Vegas certainly won’t help the cause.

Driving this slow-motion train wreck is a simple truth: There is no amount of money that will persuade a voter to vote for someone for whom they don’t want to vote.

Bloomberg is hardly the first big spender to waste his money, and he won’t be the last. Lest we forget 2016, when Jeb Bush relied on the Washington establishment to bankroll his presidential campaign, only to flush $130 million down a Florida toilet. Jeb! consistently polled in the single digits — below 5 percent and even worse than Bloomberg — buying only humiliation at the hands of Trump.

Jeb isn’t alone either. Just ask Hillary Clinton, Ted Cruz, Mitt Romney or Marco Rubio. These former presidential candidates round out the largest super PACs in history — Romney in 2012 and Clinton, Cruz, Rubio in 2016 — and they all met the same fate: Defeat. Meanwhile, Trump cruised to primary victory after victory running with almost no advertising. Then, he won the White House after being outspent by the Clinton machine.

Why? Because the American people supported him.

It bears repeating: There is no amount of money that will persuade a voter to vote for someone for whom they don’t want to vote. Not even a cool $1 billion — the sum of all pro-Clinton spending in 2016 — can accomplish that.

Money doesn’t buy results; ideas do. Coming up with a winning idea and promoting it to the masses is the recipe for success. Of course, you need money to spread that idea via advertising, but money itself is less important than authenticity.

For Trump, that winning idea was “make America great again.” When he said it, Americans believed him — because authenticity goes a lot further than trying to buy voters. And, unlike other politicians, Trump has kept the promises he made.

If elections were truly “rigged” for whomever spent the most, President Hillary Clinton would be sitting in the White House. But she isn’t. And that is the beauty of America’s democratic process: We can all vote for the candidate of our choosing, and the candidate who inspires the most support will win. The power is ours.

None of this bodes well for Bloomberg, who has billions of dollars at his disposal but not much else. His campaign will lose in 2020, joining a graveyard of big-money spenders. It’s only a question of when, not if.

The right candidate with the right message — the authentic message, an American message — will prevail. And, once again, that will be President Trump — no matter how much money is spent on the other side.