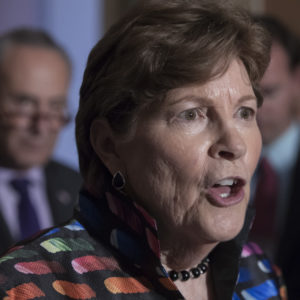 “Any nominee for Supreme Court justice must be committed to protecting the rights of all Americans – including the reproductive rights of women – not just focused on protecting corporate special interests and the powerful few. I also continue to believe that Supreme Court nominees should have broad support from both parties and be able to clear a 60-vote threshold,” Hassan said in a statement.

That is unlikely to happen. Like Justice Gorsuch, Kennedy’s replacement will almost certainly be approved using a simple-majority standard.  If Sen. Hassan is unhappy about that, she should complain to her colleague and fellow Democrat, Sen. Jeanne Shaheen.

In November, 2013, Sen. Shaheen voted in favor of then-Senate-Majority-Leader Harry Reid’s invocation of the “nuclear option”–using a simple majority of the US Senate to change important rules, like requiring 60 votes for cloture. With Shaheen’s help, Democrats dumped the 60-vote rule for Obama nominees.  And at the time, the top Republican in the senate, Mitch McConnell, made this prediction:

“Let me assure you: this Pandora’s Box, once opened, will be utilized again and again by future majorities – and it will make the meaningful consensus-building that has served our nation so well a relic of the past.”

In her comments on the retirement of Justice Kennedy, Shaheen pointedly did not mention the 60-vote standard invoked by Sen. Hassan:

“I want to thank and congratulate Justice Kennedy for his thirty years of service on the Supreme Court. I wish him all the best in his retirement,” said Shaheen. “It’s important that whoever the President nominates to replace Justice Kennedy does not jeopardize progress on women’s reproductive, LGBTQ and civil rights. In particular, any nominee should uphold the precedent of Roe v. Wade. I will only support a nominee within the mainstream of judicial thought who will protect Constitutional rights and freedoms. I strongly urge the President to nominate a non-ideological candidate who will fairly interpret the Constitution, and I encourage Granite Staters and all Americans to make their voices heard to send a clear message that we’re not going to go backwards as a nation.”

This isn’t necessarily the end of the story, however.  Sen. Shaheen’s position on nominees and the 60-vote threshold has been fluid to say the least.

When President Trump first nominated Judge Neil Gorsuch, for example, Sen. Shaheen rejected the argument that Democrats were invoking a 60-vote standard in an attempt to block his nomination.

“To suggest that we should not get a fair hearing on the nominee to the Supreme Court, Mr. Judge Gorsuch, I think is just not something that’s going to be good for the American people,” Shaheen said on the Senate floor.  “Unlike the Republican majority, I haven’t heard any Democrats saying we don’t think that Judge Gorsuch should get a hearing or that he should get an up-or-down vote. Everybody I’ve talked to agrees he should get a hearing and an up-or-down vote,” Shaheen said.

But not long after, Sen. Shaheen abandoned this position and joined Democratic Leader Sen. Chuck Schumer’s call for a 60-vote standard for Gorsuch’s nomination.

“As Judge Gorsuch’s nomination comes to the floor, I will support a 60-vote threshold for approval, an appropriate high bar that has been met by seven of the eight current Supreme Court justices,” Shaheen said in March, 2017.

The filibuster horse is long out of the barn, so the position of the two Granite State senators is largely moot. It would be interesting to know, however, if Sen. Shaheen is prepared to admit that she regrets her decision to vote for the nuclear option now that it’s blown up in the Democrats’ face.