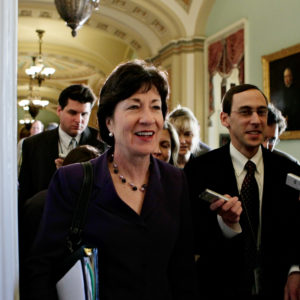 The race for control of the US Senate in 2020 is officially underway in the key swing state of New Hampshire. On Monday, Brig. General Don Bolduc (Ret.)  formally announced his candidacy in what is likely to be a hotly-contested GOP primary, and will undoubtedly be a competitive general election against incumbent Democrat Sen. Jeanne Shaheen.

“Why can’t the people in Washington, DC get it right?” Bolduc asked an enthusiastic Republican audience. “Because they’re the wrong people.”

Shaheen’s 2020 re-election bid is consistently featured in political analysis as a potential pickup for the GOP next year. Given the current map and the size of the GOP majority (53-47), a Democratic loss in the Granite State would all but assure Republicans maintain control of the Senate.

At first blush, the 2020 Senate map looks good for Democrats.  You’ve got an unpopular incumbent president who’s credited with the 2018 Blue Wave that brought Speaker Nancy Pelosi into power, and Republicans have to defend far more Senate seats (22) than Democrats do (12).

But on closer inspection, the odds of Democrats taking control of the Senate look much less promising. Nearly all of those Republican incumbents are in safe or strongly-leaning GOP states. Only two are in states Trump lost: Sen. Cory Gardner in Colorado and Sen. Susan Collins in Maine.

Democrats need to flip four seats to win 51 and take an outright majority. If a Democrat wins the White House, then 50 will do, with Vice President Buttigieg (?) breaking any ties.  As of now, however, just three states are rated toss-ups by the University of Virginia’s Larry Sabato —Alabama, Arizona and Colorado. And the most vulnerable senator of the three is the Democrat, Alabama’s Doug Jones.

“There’s always a chance Democrats could do it, but three takeaways at this point is improbable,” Suffolk University’s Director of Polling David Paleologos tells InsideSources. “Not impossible, but improbable.”

And while political fortunes are fluid and the 2020 election is more than 17 months away, if Democrats are counting on President Trump’s unpopularity dragging down the GOP’s Senate majority, Paleologos’s latest polling on that front isn’t good news, either. As USA Today reports:

In poll after poll, Trump’s national approval continues to hover around 44 percent. Not great—but not low enough to undermine solid GOP incumbents in their home states, either.

And then there’s Susan Collins of Maine. She’s been a top target of progressive Democrats since her vote to confirm Brett Kavanaugh to the Supreme Court. Activists have already contributed more than $4 million to an ActBlue fund dedicated to her defeat. On Monday, Maine’s Speaker of the House Sara Gideon announced her candidacy, and she hit the ground running with endorsements from the state attorney general and state Senate majority leader. In a state where President Trump is currently underwater by nine points, that’s all good news.

And yet Collins is still considered the frontrunner, in part because she’s faced similar odds in the past and always come out on top.  She first won her seat in 1996, a terrible year for Republicans both nationally (incumbent Bill Clinton crushed the hapless Bob Dole) and in Maine where President Clinton won by 21 points.

She did it again in 2008. Barack Obama carried Maine 58-40 percent, but Collins was re-elected with more than 60 percent of the vote. And while it’s true that Trump is struggling in Maine, his performance in 2016 was actually the best by a GOP presidential candidate there since 1988.

“It’s virtually impossible to see a map where Democrats win a majority in the US Senate but don’t win Maine,” Sarah Dolan executive director of the conservative group America Rising told InsideSources. “After a string of recruitment failures, Chuck Schumer and the DSCC are now pinning all their hopes for a majority on  candidates like Sara Gideon, who are untested on a national stage and are going to face a level of scrutiny unlike anything they’ve seen before.”

In Colorado, Democrats at the local and national level are pressuring 2020 presidential candidate Gov. John Hickenlooper to abandon his longshot bid for the White House and take on GOP incumbent Sen. Gardner. Thus far their efforts have had little effect other than to annoy the former governor.

“If the Senate’s so good, how come all those senators are trying to get out?,” Hickenlooper said at the National Press Club earlier this month.

Some Democrats still hold out hope that Hickenlooper will change his mind and make a run for the U.S. Senate, along with Beto O’Rourke in Texas and Montana’s Gov. Steve Bullock.  But as the data analysts at FiveThirtyEight observed, while their chances of winning a Senate seat are better than becoming president—they’re still long odds.

If there is a candidate in this cycle with the political skills to pull an upset, it appears to be a Republican:  John James of Michigan. The African-Amerian business owner and combat veteran was a virtual unknown when he announced his run against incumbent Sen. Debbie Stabenow in 2018 but ran a competitive race, losing by just 6.4 percent amid a national blue wave. Now he’s running against Sen. Gary Peters, and an Emerson poll in March showed James in a dead heat with the incumbent Democrat.

What Democrats need to make Sen. Chuck Schumer the next Majority Leader is a couple of standout candidates who can overperform in key red or purple states and a massive blue wave to push them over the top. They haven’t gotten the former and there’s no guarantee of the latter.

“I hate to say it, but if I had to bet today, I think the GOP picks up a seat,” one Democratic strategist told InsideSources. “Without our red-state superstars [like Bullock and O’Rourke], this map really works against us.”