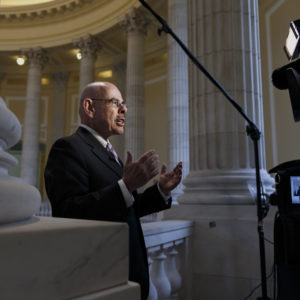 Former high-ranking Democrats are lining up against the Federal Communications Commission’s proposed privacy rules for internet providers, while others in office apply pressure for a final vote on the rules that would place strict standards on collecting and monetizing subscriber data.

Henry Waxman, former chairman of the House committee that oversees the FCC, became the latest influential Democrat to come out against the rules ahead of the agency’s planned vote before the end of the year.

Like other critics, the former chairman of the House Energy and Commerce Committee said the FCC should copy the Federal Trade Commission’s privacy rules requiring companies to get permission before collecting sensitive consumer data like medical, financial, social security numbers and information on children.

If adopted, FCC Chairman Tom Wheeler’s plan would require internet service providers (ISPs) to get subscriber permission before collecting and monetizing virtually any data, even information most wouldn’t describe as sensitive — a plan Waxman and others say is overkill that could hurt innovation, reduce consumer choice and raise prices.

“What we don’t need are different approaches,” Waxman said on a conference call with reporters Wednesday. “The FCC shouldn’t be reinventing the wheel.”

The former California representative, now a lobbyist for the tech and broadband industries, said two sets of rules for two sides of the online ecosystem would confuse consumers and disadvantage ISPs, since edge providers like Google and Facebook — giants of targeted advertising online — wouldn’t face the same restrictions.

“What we would hope is that the FCC would recognize that they shouldn’t be so out of line with what the FTC has done,” Waxman said. “Not that they have to be exactly consistent, but there ought to be some expectation, which consumers generally have, that they’re going to be treated the same by different parties across the internet, not that we’re going to have one set of standards of privacy for ISPs and another set for the edge providers.”

An analysis of the rules by constitutional law experts, which said the rules could violate ISPs’ First Amendment rights to share data as a form of free speech, is further evidence the FCC should go back to the drawing board, according to Waxman.

“There is also a serious risk that if the FCC does not change course, its proposal will be struck down by the courts, reopening the very gap in internet privacy protection that the agency is trying to fill,” he wrote in a Hill op-ed Tuesday. “Indeed, as Harvard Law Professor Laurence Tribe has concluded, the original rules would ‘run … afoul of fundamental First Amendment limits on the FCC’s authority to regulate customer information’ due to the lack of technological neutrality between the treatment of ISPs and edge providers and the absence of any legitimate reason to regulate ISPs’ use of data more stringently than everyone else’s online.”

He was joined by President Obama’s first FTC chairman and frequent critic of the rules, Jon Leibowitz, now a lobbyist for the industry. Leibowitz led the passage of the agency’s current privacy regulations, looked to as the government and industry benchmark.

The former chairman said the FCC’s rules as written would prevent ISPs from offering even basic new services to subscribers.

“I happen to like it when Amazon or Netflix recommends a book or movie to me, but under a fair reading of the draft rule, an ISP — absent opt-in consent and perhaps multiple opt-in consents — would be prohibited from marketing its own home security, music streaming or energy management services to its own customers using its own customer lists,” Leibowitz told reporters.

He said comments this week by Google endorsing the FTC approach should give the FCC serious pause before moving forward.

While both said the word on the street is that the FCC is working to change its proposal to more closely resemble the FTC’s, Democrats on Capitol Hill including New Jersey Rep. Frank Pallone Jr., now the ranking Democrat on Waxman’s old committee, urged the FCC Wednesday to expedite passage of the rules.

“To fully answer the public’s call and maximize the economic power of the internet, the two agencies must do all they can to protect consumers by using the tools that they have today,” Pallone wrote in an op-ed for The Huffington Post. “That means the FCC must act now to finalize strong, new privacy rules.”