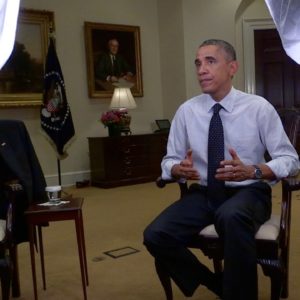 Democrats in Congress are accusing the Trump administration of influencing the Federal Communications Commission to repeal net neutrality rules former President Barack Obama called for in 2014, a move they applauded.

In comments to the independent agency filed Friday, House Democrats accused the White House of “directing the actions of the commission” over its potential plan to repeal net neutrality rules. The regulations restrict internet providers like AT&T and Comcast from blocking, throttling, or prioritizing web traffic.

“It appears that the president directly ordered [FCC] Chairman Pai to repeal net neutrality, potentially during a visit to the Oval Office,” Democrats wrote. “If true, this proposal clearly violates our intention to create an agency independent of the executive.”

The filing lays out a timeline beginning in early March when FCC Chairman Ajit Pai met with President Donald Trump in the Oval Office. Neither the White House nor Pai revealed what they discussed during the meeting, but an FCC press release said “no proceedings pending at the FCC were discussed.”

“Shortly after this announcement, Chairman Pai circulated a draft proposal that tracked precisely with the announcement from the White House,” Democrats’ filing reads.

During the press conference in question, Spicer told reporters the White House endorsed a bill from congressional Republicans to remove privacy rules for internet providers, passed under the Democrat-led FCC during the Obama administration. While those rules were an outgrowth of net neutrality, they were passed under a separate proceeding, and no mention of repealing net neutrality is made during the March 30 press conference.

Pai didn’t release his proposal to scale back net neutrality rules until the end of April. But regardless of Democrats’ purported timeline of events, the White House publicly came out in support of Pai’s plan to review the rules in July, when then-deputy press secretary Sarah Huckabee Sanders said, “[W]e support the FCC chair’s efforts to review and consider rolling back these rules.”

“While the President and his administration are certainly entitled to voice an opinion, it is not permitted to direct the actions of the agency,” Democrats including Pennsylvania Rep. Mike Doyle, the ranking Democrat on the House subcommittee charged with overseeing the FCC, wrote in their comments to the agency. “Unfortunately, this process has been wrought with indications that the president is actually directing the actions of the commission.”

But Doyle didn’t have a problem with the White House directing the FCC in 2014, when Obama in a video and comments filed with the agency, called on the FCC to adopt the strong net neutrality rules it eventually put in place.

“I’m glad to see the president take a strong position in support of the open internet, and join with those of us who have long fought for strong net neutrality rules,” Doyle said in 2014. “I strongly encourage FCC Chairman [Tom] Wheeler and the rest of the commission to adopt the president’s proposal.”

He wasn’t alone. Democrats all the way up to House Minority Leader Nancy Pelosi applauded Obama.

“Today, President Obama affirmed that free and open access to the internet is a bedrock right of the 21st century,” Pelosi said. “The FCC must act swiftly to create clear and enforceable net neutrality standards so the internet can continue to foster freedom and prosperity here in the United States and around the world.”

Almost 40 caucus Democrats in the House and Senate echoed similar sentiments including Massachusetts Sen. Elizabeth Warren and Vermont Sen. Bernie Sanders, and noted in a 2014 joint letter asking the FCC to adopt net neutrality that “President Obama recently joined us in urging this action.”

Not only did Obama publicly call on the agency to take a specific action, that call reportedly forced the FCC to change course after months of work on a very different, lighter-touch regulatory approach. Republicans, concerned Obama had improperly influenced the agency, subpoenaed documents including emails from the FCC that show former FCC Chairman Tom Wheeler ordering his pending plan “paused” after the president’s announcement. He then directed a proposal that mirrored Obama’s comments.

Republicans detailed the order of events, corroborated by press accounts, in a lengthy 2016 report that was widely panned by Democrats. Wheeler later testified to Congress he was not directed by the White House, and that he weighed Obama’s comments like any other.

It’s unlikely Pai would’ve needed White House influence to take action on net neutrality. He loudly opposed and voted against the rules when they were passed in 2015 and predicted today’s events if the FCC opted to expand internet regulation on a party-line vote.

“I don’t know whether this plan will be vacated by a court, reversed by Congress, or overturned by a future commission,” Pai said at the time the rules were passed. “But I do believe that its days are numbered.”