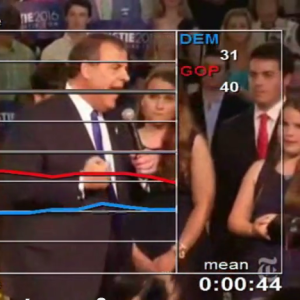 New Jersey Gov. Chris Christie rose to national prominence with his tough talk and willingness to take on major interest groups. His reputation of “telling it like it is,” which is now his campaign slogan, led many to believe he would have won the GOP nomination if he ran in 2012, and that he could have been the frontrunner heading into 2016.

But then Bridge-gate happened. Tough-talking language that once made Christie a political star now leaves voters unimpressed.

This new understanding of voter attitudes comes from dial testing of Christie’s presidential campaign announcement from earlier this week. The analysis was conducted by Maslansky + Partners, a language strategy firm, in cooperation with InsideSources. The dial group included 9 Democrats and 15 Republicans.

“People usually like his straight-talking style. But they’re not going to give him permission to play the anti-politics card in in a post Bridge-gate world,” said Jenn Dahm Peterson, vice president at Maslansky + Partners.

Pundits generally praised Christie’s oratory, but this specific tough-talking message is far less effective with voters in the wake of the scandal.

Christie’s rhetoric that his campaign “will not worry about what is popular but what is right” was given unfavorable ratings by Republicans and Democrats.

As could be expected, Democrats showed very unfavorable reactions throughout the clip of Christie’s speech. But Republicans, too, were negative on Christie. Only when Christie spoke aspirationally about making America great again did Republicans begin to respond positively.

Maslansky + Partners also recently released dial testing of Jeb Bush discussing Common Core that questions many of the assumptions pundits have made about the 2016 presidential race.