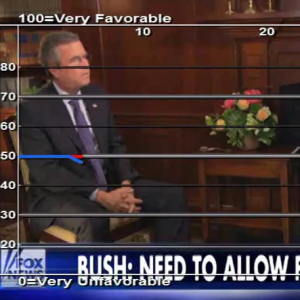 Before Jeb Bush ever announced his campaign for president, pundits were saying his support for Common Core math and English education standards would cost him the nomination.

Other Republicans in the field have flip-flopped on their prior support for Common Core in order to distinguish themselves from Bush. Louisiana Governor Bobby Jindal has filed a federal lawsuit to stop the standards that he once worked to establish in his state. Donald Trump went out of his way to directly attack the former Florida Governor during his campaign announcement, stating, “[Bush is] in favor of Common Core. How the hell can you vote for this guy?”

But all the candidates, campaign strategists, and pundits appear to be wrong. Republican voters like what Bush has to say about Common Core, according to new dial session testing conducted by Maslansky + Partners, a language strategy firm, in cooperation with InsideSources.

“As long as Jeb Bush continues to frame Common Core as about ‘high standards’ it will not cost him the nomination,” says Jenn Dahm Peterson, vice president at Maslansky + Partners. “Most voters don’t know much about Common Core. But almost everyone, Democrat and Republican alike, agrees on the need for higher standards.”

The dial session was conducted with 11 Republicans and 13 Democrats. They reacted to footage of an interview of Jeb Bush by Fox News’ Megyn Kelly that aired in May. The participants turn dials to indicate whether they have a favorable or unfavorable view of what they are hearing.

Some outspoken conservatives and liberals have voiced concerns about the policy. Liberal teachers unions oppose accountability through standardized testing. Conservatives have opposed the policy because the Obama Administration has tied Race to the Top funding to adoption of the standards, even though the federal government was not involved in their creation.

One of the statements by Bush that won the highest support from Republicans in the dial session was: “[Standards] need to be state-driven. The federal government should play no role in this.” This is consistent with polling that shows Republican voters approve of high standards established by the states.

“One thing Bush does well is that he doesn’t suggest those who oppose Common Core are wrong,” explains Dahm. “Instead, he disagrees in an agreeable way by acknowledging their concerns are legitimate. By doing so, he’s able to maintain a likeable persona in the face of controversial policy position.”

Bush’s successful education record as Governor of Florida is particularly helpful as he discusses his views on Common Core, but Americans don’t enjoy hearing about how the country has fallen behind in education quality.

“Bush should focus on the positive—his record of success with Common Core in Florida. When he goes negative with assertions about how the American education system is worse than other countries, it’s a turn off for the patriotic GOP base,” says Dahm.

Dahm notes that while Democrats generally view what they heard from Bush unfavorably, that is mostly a result of party affiliation. It’s typical for Democrats to be about 20 points lower than Republicans when watching a GOP politician, and vice versa. Even so, Democrats had a very positive reaction as Bush discussed the results he achieved in Florida.

As some GOP candidates have worked to establish their credentials as anti-Common Core warriors, this issue may continue to be discussed leading up to 2016, but conservatives like what Bush has to say about Common Core. Whether Bush wins or loses, his support for higher education standards is unlikely to cost him the nomination.