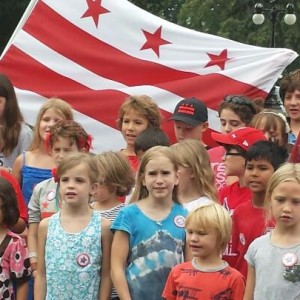 Seeking to capitalize on Oliver’s recent support for the statehood movement, the group crooned lyrics to the song first featured on HBO’s Last Week Tonight: “Let us have gun laws! Let us have weed! Let us decide the things that we need!”

District resident Tim Krepp, who organized the singalong, told InsideSources he was glad to have young kids participate and advocate for D.C. — despite the fact that Oliver’s song includes some salty language. Krepp said its reference to “some asshole with a [legislative] rider” didn’t bother him, because Americans need to know how Congress has saddled D.C. funding bills with its own conservative policy priorities such as defunding abortion services.

“Frankly, these are assholes,” he said of lawmakers who engage in this practice. “Something like that has a little shock value, and that’s what we’re using here.”

The District’s nonvoting congressional delegate, Democrat Eleanor Holmes Norton, was also on hand Sunday. She told reporters she’ll be introducing a congressional resolution in honor of Oliver and screening his recent segment at a briefing about the District later this year. The hope is that the national attention will boost a political movement that has struggled to gain traction outside the Beltway.

“The people who will best be able to move us ahead on statehood are people who make fun of Congress for not giving us statehood,” she said. “The best way to do it is humor. … Not by preaching it. Not by my going on the House floor to tell you about it.”

As InsideSources first reported last week, a D.C. Council resolution has already been drafted to acknowledge Oliver’s advocacy for the District, and local lawmakers are hoping to honor him at a public ceremony at city hall.

“He’s likely to make fun of it — which is good,” she said with a smile.