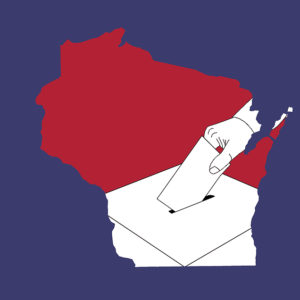 The head of the Wisconsin Elections Commission said last Thursday that the state looks forward to demonstrating the “strength, security, integrity and transparency” of its election system in the recounts in Dane and Milwaukee counties, which began Friday.

But Wisconsin’s election system has serious flaws, according to independent elections watchdog Karen McKim, who tracks how the state conducts elections and posts on the website WisconsinElectionIntegrity.org. She gives the state a “C” overall.

One of the biggest issues, she says, is the voting machines.

McKim, a former auditor with the state, says despite her urgings, the Wisconsin Elections Commission has refused to tell municipal clerks about serious security flaws with Dominion ImageCast Evolution (ICE) voting machines, which are used in 13 of the state’s 72 counties.

“In a rational system, that machine would never have been certified by anyone, ever,” says McKim.

The Dominion ICE machines were approved by the state of Wisconsin in the summer of 2015, with employees of the Government Accountability Board assuring the board members that the machines can run elections that are “transparent, fair and secure.”

But cybersecurity experts consider them some of the worst voting machines on the market in terms of security.

In 2018, Andrew Appel, a Princeton University professor of computer science and one of the top experts in the country on voting machine security, wrote that the Dominion ICE has a “serious flaw,” explaining that after a voter marks the ballot and reviews it, the voting machine can print more votes on it.

“This appears to be an elementary security-design mistake,” he wrote.

McKim says Dominion salespeople have been selling municipal clerks in the northern part of the state on the machines, even with the widely publicized flaws, and that citizens have called her asking for her help.

“I don’t have the resources to educate all the clerks about the national security concerns about the Dominion ICE or the fact that bills have been introduced in Congress that would make them illegal,” she said, “and so I called the Elections Commission and I said, to their lead voting machine staff person, I said, ‘Well, you tell them. C’mon. Send them a memo saying here’s background information on the machines that are available to you. Know that the Dominion ICE has this security flaw, you know? Just tell them the facts. You don’t even have to make recommendations.’ And they would not.”

Donald Trump won Wisconsin by 22,748 votes in 2016. This year, according to the results certified by counties, he lost the state to Joe Biden by about 20,000 votes.

Among the 13 counties in the state that use Dominion ICE machines, three are in the Milwaukee area — Racine, Washington and Ozaukee counties. Trump won all three, but Biden saw large increases in vote totals over Hillary Clinton’s four years earlier in all three counties.

In Washington County, Biden got 27 percent more votes than Clinton did in 2016. In Ozaukee County, he got 31 percent more, and in Racine County he got 18 percent more. Trump also saw his vote totals increase over 2016 in all three counties.

Dane and Milwaukee counties, which are recounting more than 800,000 ballots this week to fulfill a request by the Trump campaign, both use a machine from Dominion’s competitor, Election Systems & Software (ES&S), called the DS200.

ES&S voting machines are often outfitted with modems, making them hackable, as the New York Times reported in 2018. But it’s Dominion that’s been in the news most since the Nov. 3 election, with attorney Sydney Powell telling Howie Carr on Newsmax TV on Friday that she has more evidence of fraud involving Dominion machines than she “can say grace over,” that the fraud was “very widespread, very deliberate” and “very well-funded” and involved “roughly 7 million votes” moved from Biden to Trump.

She said she intends to file one or more federal lawsuits before the end of the week.

However, on Sunday, the Trump campaign’s legal team issued a statement distancing themselves from Powell. “Sidney Powell is practicing law on her own,” they said in a statement. “She is not a member of the Trump Legal Team. She is also not a lawyer for the President in his personal capacity.”

Meanwhile, Wisconsin clerks are doing voting machine audits this week, hand-counting paper ballots from 5 percent of wards in the state.

In addition to the Dominion ICE machines, several Wisconsin counties use Sequoia voting machines. Sequoia was purchased by Dominion Voting Systems in 2010.

It’s unclear what will happen if audits reveal an issue with voting machine counts and whether it will lead to a larger-scale audit where all paper ballots in a municipality or county are hand-counted.

The full 2016 recount in Wisconsin paid for by Green Party candidate Jill Stein revealed that an estimated 1 in every 170 votes had been originally miscounted by municipal clerks, according to a report by a group of researchers from the University of Wisconsin, Harvard and MIT.

One machine, the Optech Eagle, flubbed the count so badly in several counties that it was subsequently de-certified by the state. In the city of Marinette, it failed to record more than 30 percent of the absentee ballots in three wards.

The clerk had noticed that votes were missing but had certified them anyway and sent them on to the county. The error was only uncovered because the county did a full hand recount of paper ballots.

“How many elections did those old machines miscount before the recount revealed the problem to the general public?” McKim asked in September of 2017 in a post on WisconsinElectionIntegrity.org. “And why didn’t Wisconsin’s election officials notice and correct this problem sooner?”