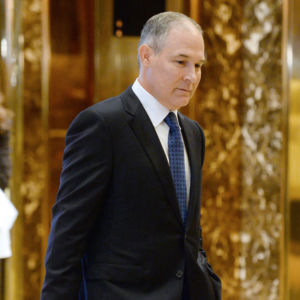 Update: EPA spokesman Jahan Wilcox has declined to respond to repeated requests from InsideSources to offer an explanation of why the reporter was deemed such a threat as to be escorted out by law enforcement. Additionally, The Ames Tribune, a local daily paper in attendance at the event, has noted the incident in its reporting.

A reporter with InsideSources Iowa was escorted out of an event by a Story County Sheriff’s Deputy that featured Environmental Protection Agency Administrator Scott Pruitt as the speaker.

An InsideSources reporter showed up to attend the event, stating his name and his outlet, and was allowed into the press booth with other members of the press, as was well as TV news. The reporter gave his name and outlet to the EPA’s attending press secretary.

After spending 10 minutes in the press booth with the other reporters, the reporter was approached by a Story County Sheriff’s Deputy, as well as several staff members of both the EPA and Couser Cattle Company, who did not give their names when asked, and was told that he had to leave the premises.

The reporter asked for the official reason as to why he was to leave, and was told that “since you weren’t on the list, you’re not allowed in,” according to the reporter’s recording.

When asked what the employee’s name was who was telling him to leave, the response given to him was “who are you with,” according to the reporter’s recording.

The reporter subsequently responded with his name and outlet.

The sheriff’s deputy then stepped in and said that, “they’re asking you to leave, you didn’t RSVP properly, and it’s too late to do it now, so…,” according to the reporter’s recording.

There were other members of the press corp who were not on the list, but were allowed to remain.

The reporter in fact had tried repeatedly to RSVP for several days prior to the event. He left a voicemail with EPA Region 7 (IA, KS, MO, NE) Press Contact Angela Brees and had received no response. He then contacted the EPA switchboard operator to verify the event and was told to dial the EPA’s press contact number at 202-564-4355, which leads to an answering machine, upon which he left a message.

According to several Iowa outlets’ reporting leading up the Pruitt event, the event was invite only, but media was allowed to attend.

In addition, the Des Moines Register live-streamed the event for the public to see.