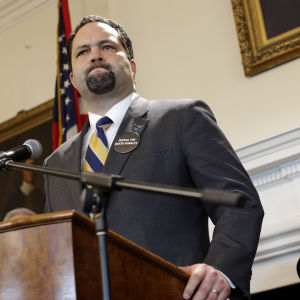 When it comes to criminal justice reform, former NAACP president Ben Jealous thinks the left can learn from the right.

“[P]rogressives in some ways have been catching up with conservatives who have, in some states, taken a lead,” Jealous said Monday at the liberal Center for American Progress in Washington, D.C.

Elaborating on his remark in an interview with InsideSources, Jealous cited two Republicans — Georgia Gov. Nathan Deal and former Texas Gov. Rick Perry — who “did more to downsize their state prison systems than [Democratic Gov.] Jerry Brown did in California.”

The civil rights leader also name-checked scholars at the libertarian Cato Institute, “who traditionally have been very good” on criminal justice, and praised much of the national “Right on Crime” initiative championed by former Republican House Speaker Newt Gingrich. Jealous said those efforts, combined with rare bipartisan action in Congress, should provide inspiration to Maryland, where activists are pushing for reform following the death of Freddie Gray and subsequent unrest in Baltimore earlier this year.

Jealous appeared at the Center for American Progress to moderate a panel on six reform proposals he authored to reform the Baltimore Police Department. (He worked on these plans with the think tank and the Campaign for Justice, Safety and Jobs, a coalition of Baltimore community groups.) Highlights including firing “bad cops” who have “demonstrated corruption or unnecessary violence,” training police to deescalate intense situations, putting body cameras on officers, and removing gag orders on victims of police brutality.

These proposals were endorsed by the Baltimore Sun, but activists know they face many obstacles moving forward.

“Police departments generally don’t want to do these kind of things,” said Ron Hampton of the National Police Accountability Project, who spoke on Jealous’ panel. As the former executive director of the National Black Police Association, Hampton said no one should underestimate the power of police unions, a driving force against activists’ priorities. He noted that the Fraternal Order of Police isn’t just “the world’s largest organization of sworn law enforcement officers.” It’s also a major political player through lobbying and campaign donations.

Striking a note of optimism, Jealous told InsideSources he hopes Baltimore’s Democratic Mayor Stephanie Rawlings-Blake will have a greater ability to enact meaningful reform now that she’s not running for reelection. Jealous considered running to replace her, but decided against the move in August. He was then prepared to chair the campaign of author and educator Wes Moore, but he also opted against a run.

“We’re trying to figure out what’s next,” Jealous said. “What’s important with this race is that anybody who’s running for office actually pay attention to what’s coming out of these community organizations and really hear the need to disrupt the status quo in Baltimore.”

As of last month, the Democratic candidates who had announced their candidacies or filed to run included former Mayor Sheila Dixon, a pair of city council members and a state legislator.