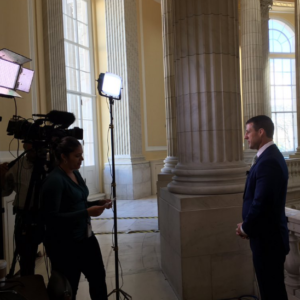 Mullin up 11, but “Informed Ballot” has Jackson leading by 6 points

Oklahoma Congressman Markwayne Mullin should have been set for an easy reelection campaign, but an exclusive poll conducted by InsideSources shows the race is unexpectedly tight leading into Tuesday’s primary. Moreover, the more voters know about each candidate, the worse it is for Rep. Mullin.

Mullin, a two-term Republican incumbent, is facing a primary challenge from Jarrin Jackson, a combat veteran who recently won the endorsement of Tom Coburn, the popular former senator. Mullin has also recently drawn strong criticism from conservative groups aligned against legislation he’s proposed to bring federal regulation to Mixed Martial Arts competition. In a conservative House district, these challenges from his right have left Mullin on shaky ground.

However, InsideSources asked a series of follow-up questions about candidate biographies and the attacks being lodged by conservatives opposing Mullin. Mullin has been mute in criticizing his lesser-known opponent, so attacks on Jackson were not included. In this test, known as an “educated ballot,” which is intended to simulate how voters may react to what they hear in the media and from other voters leading up to the primary, Jackson was catapulted to a lead of 45.8 percent to 39.6 percent, with 14.6 percent unsure of how they will vote.

The educated ballot test does not mean Jackson has the momentum to win. As is often the case with primary challengers running against incumbents, Jackson may not have the resources to reach voters with his message. Jackson has raised and spent a small fraction of Mullin’s war chest. According to the most recent filings to the Federal Election Commission, Mullin spent over $300,000 in the two-month period ahead of the primary. Jackson has spent less than $50,000.

While Senators Jim Inhofe and James Lankford have both endorsed Mullin for reelection, the surprise endorsement from Coburn seems to be in response to Mullin walking back a pledge he made in 2012 to run for no more than three terms in the House.

InsideSources told survey respondents about the endorsements, and read language to voters similar to what is found on each campaign’s website about candidate biographies and issue positions. Hearing positive biographical notes on Mullin made 64.7 percent of likely primary voters say they would be more apt to support him, while 58.4 percent found themselves more likely to support Jackson based on the lesser-known opponent’s military service and policy goals.

Voters were told of major conservative criticisms of Mullin, including his support for the Export-Import Bank, which critics argue supports corporate welfare for large companies. Respondents were also told Mullin is facing an ethics investigation for earning too much income outside Congress, and his business received hundreds of thousands of dollars in Obama Stimulus funding. Nearly 50 percent of likely voters said hearing this made them less likely to support Mullin. Conservative groups, including Heritage Action, have in the past made calls to voters in the district critical of Mullin on some of these points.

The InsideSources poll of 521 registered Republican voters in Oklahoma’s 2nd Congressional District was conducted June 20-22, and has a margin of error of +/-10% after applying a likely voter screen and demographic weighting.  Data was gathered via interactive voice response (IVR) calls. Out of 1622 partial responses, 521 complete responses were gathered. Poll analysis was conducted by Praecones Analytica. InsideSources will be tracking races nationwide ahead of November’s elections.