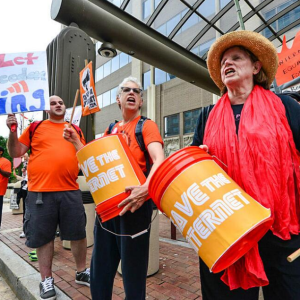 Fact versus Theory in the Net Neutrality Debate

The deadline for filing public comments to the Federal Communications Commission on the Notice of Proposed Rule Making on Protecting and Promoting the Open Internet, also known as net neutrality, was extended from Tuesday July 15 through Friday July 18. The sheer number of comments overwhelmed the FCC’s comment system and stands at 1 million comments at this writing.  This filing now holds the record for the FCC for comments on a rule making process.  The Janet Jackson wardrobe malfunction incident inspired 1.4 million complaints but was not part of a proceeding.

It is difficult to find much substance amongst the comments.  Most are 1-2 line emails exhorting the FCC to save the internet.  Such comments are hard to take seriously, for if indeed the internet was in such danger, commenters would be moved to write more than 2 lines before they go back to their Netflix movie.

There are some important policy issues at stake, namely whether broadband should be classified as a utility similar to the telephone network, under Title II of the Communications Act.  Larry Downes argues why classification under Title II is the biggest lie of net neutrality:

Utility regulation—or perhaps outright nationalization of the largest ISPS—is once again being touted as the panacea for everything that currently (or, more often, in the future might) ails the Internet economy.  Limited choice of broadband providers?  Netflix streaming too slow?  The failure of older Americans to see the value of using the Internet?  Poor customer service?  Turn the Internet into a public utility, and all of it goes away.

A common misunderstanding is that the FCC’s proposal—or the desire of broadband providers—is to turn the Internet into fast lanes and slow lanes.  This analogy is an exhibit of net neutrality advocates facility with language and storytelling, but it is a mischaracterization of how the internet works and is a manipulation from the “culture of fear” playbook.  See Richard Bennett’s filing for a discussion on why fast and slow lanes are incorrect descriptions.

In my own filing, I focus on the academic literature of net neutrality. Of the more than 7000 academic articles on net neutrality that have been written to date, there is little to no empirical evidence about its benefits. The top ten most cited articles are theoretical, and their conclusions conflict about whether net neutrality is needed.

Good regulation rests on an intellectual agreement about market failure.  As the academic literature is ambiguous, and there is no academic consensus on whether there is market failure, the FCC should not impose net neutrality rules.  Until such a consensus is formed, a multi-stakeholder dialogue can manage the issue.  Indeed, multi-stakeholder models on net neutrality have been in place for more than 5 years in the Nordic countries, and no violations have been recorded by regulators. Alternatively, if net neutrality pertains to consumers, which advocates purport, then the Federal Trade Commission is the more appropriate agency to address it.

I also review the new research on utility style regulation on broadband in Europe.  A report comparing the US and EU on next generation access to broadband, network investment, speed, and pricing comes from Christopher Yoo of the University of Pennsylvania.  His report “US vs. European Broadband Deployment: What do the data say?” notes that for the period 2011-2012 next generation access (NGA) to networks with speeds of 25 Mbps and higher was 82% in the US, but just 54% for the EU.  The coverage of 4G/LTE mobile in the US is three times the rate of the EU, and fiber to the premises (FTTP) is nearly double in the US. This is achieved because the US approach incentivizes broadband providers to invest in networks. Private investment in this area amounted to $562 per household in the US in 2011-2012, but just $244 in the EU.

Because the FCC record has only scant evidence on the incidence of violations of net neutrality in over two decades of the commercial Internet, the arguments in favor of net neutrality and Title II classification are generally ideological and theoretical. It’s unfortunate that a campaign waged largely by two powerful advocacy organizations is distracting the FCC from its mission and two crucial issues for America’s future, spectrum reform and a national public safety network.

Roslyn Layton is co-founder of ChinaTechThreat.com and an international technology policy researcher. She wrote this for InsideSources.com.