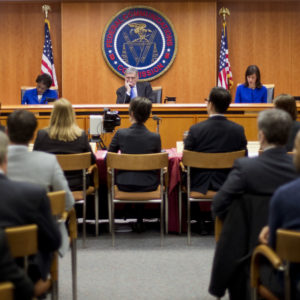 FCC Approves Airwaves for 5G ‘Killer Applications Yet to Be Imagined’

The Federal Communications Commission voted Thursday to approve the first allocation of 5G airwaves for auction to wireless providers like AT&T and Verizon, already conducting tests to deploy wireless speeds 10 to 100 times faster than 4G LTE by 2020.

“I do believe this is one of, if not the, most important decision this agency will make this year,” FCC Chairman Tom Wheeler repeated of his Spectrum Frontiers Order approved in a rare unanimous vote by all five commissioners during the FCC’s July open meeting.

The plan sets aside nearly 11 Gigahertz of high-band spectrum, including 3.85 GHz of licensed and 7 GHz of unlicensed airwaves for 5G, making the U.S. the first globally to begin taking advantage of such high-band spectrum previously unusable due to the limits of antenna technology.

The higher bands, though tougher to access, boast wider bandwidth that could eventually increase wireless speeds up to 100 times what they are today, and enable mobile downloads of high definition 4K video, virtual reality and technology unimagined in city infrastructure and the internet of things.

“5G will enable killer applications yet to be imagined,” Wheeler said, adding he expects the first commercial deployments of 5G to take place as soon as 2020.

In addition to the spectrum approved in the 28 GHz, 37 GHz, and 39 GHz licensed bands, and new unlicensed band at 64-71 GHz, the FCC adopted a Further Notice of Proposed Rulemaking to approve another 18 GHz of high-band spectrum and seeks comment on making more spectrum available for sharing.

Democratic Commissioner Mignon Clyburn summed up the feelings of most Americans during the meeting when she jokingly asked Wheeler “just what is 5G?” (see our explanation here), and added she was “willing to bet that your answer to the question … will be different from the person sitting next to you.”

“What we can agree is that the next wireless revolution promises to change the way we live, interact, and engage with our communities,” Clyburn said.

Though all acknowledged the importance of the commission’s action Thursday, the FCC’s third Democrat, Commissioner Jessica Rosenworcel, pointed out the hard work of building the infrastructure to harness the weak and easily fragmented signals in the upper bands is only starting.

“Though spectrum gets all the glory, the ground matters as much as the skies,” Rosenworcel said. “We need policies to promote small cells — they’re a big thing.”

Small cell networks will feature many more and smaller cell sites for bouncing and capturing the high-frequency millimeter waves harnessed in the upper bands, which have a difficult time moving through objects like the walls of a building.

Rosenworcel exhorted the commission to put incentives in place for encouraging state and local governments to build out 5G infrastructure, and during a press conference with reporters after the meeting Wheeler said the commission will do more to speed up cell tower site construction approval.

He added the FCC’s divisive pending business broadband rules will help by ensuring larger carriers like AT&T and Verizon charge affordable rates to smaller carriers like Sprint and T-Mobile for backhaul — the term used for internet data transmissions to cell towers, which facilitate bandwidth-heavy services like mobile video streaming.

In a less agreeable though still unanimous vote, the commission voted to approve standards voice providers must meet as they transition from traditional copper-based networks to an Internet Protocol (IP) framework — an effort aimed at ensuring the millions of consumers still receiving service on copper networks don’t suffer any loss in service.

“While the test sets clear, achievable benchmarks, it also provides flexibility by recognizing that a shift from traditional networks to new technologies will never be a purely apples-to-apples comparison,” the FCC said in a statement after the meeting. “The test is voluntary for carriers. Requests for discontinuance can also be reviewed through the FCC’s normal adjudicatory channels.”

“Much like the final season of Lost, that recent James Patterson novel, and every Super Bowl halftime show since Janet Jackson, there’s just not that much new being revealed,” Pai said of the order, adding that like recent iterations of famed franchises like Terminator and and Rocky, “this film doesn’t live up to the trailer.”

Harold Feld, senior vice president of leading pro-net neutrality group Public Knowledge, said the federal government has an important role to play ensuring no Americans are left behind as the U.S. embraces what’s come to be called the “tech transition.”

“We all agree that the next administration will have a huge role to play in facilitating this transition,” Feld said. “As the largest single user of telecommunications services, the federal government must be a leader, not a laggard, in embracing our communications infrastructure upgrade.”