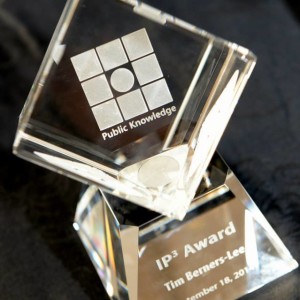 Net neutrality advocates celebrated a hard-fought victory in Washington, D.C. Thursday night, where the pro-open Internet group Public Knowledge held an awards dinner featuring a keynote speech from FCC Chairman Tom Wheeler — the architect behind the FCC’s reclassification of the Internet as a public utility in February.

Wine and champagne flowed on the second floor of the Ronald Reagan Building and International Trade Center Thursday evening, where a projector flashed the logos of sponsors and major net neutrality winners like Netflix and Twitter alongside opponents AT&T and Charter Communications. Across the room tables dressed in hors d’oeuvres and a light jazz ensemble accompanied cheery conversation between activists and FCC reps, who were at odds in the battle over the open Internet a year ago.

Public Knowledge President and CEO Gene Kimmelman acknowledged as much while introducing Wheeler, and said cold warriors and defense hawks were equally surprised when Richard Nixon opened up diplomatic relations with China.

“And Tom Wheeler makes me think of that,” Kimmelman told a chuckling audience. “Because many of you have said some things about the guy who came from industry, who was going to run the FCC.”

Last May Wheeler, a former venture capitalist and communications lobbyist who previously served as president of the National Cable and Telecommunications Association and CEO of the Cellular Telecommunications and Internet Association, indicated he was open to Internet service providers (ISPs) establishing “fast lanes” for prioritized service — a move net neutrality advocates argued would shove smaller edge providers incapable of paying more into “slow lanes,” eroding the Internet’s level competitive field.

That was before President Obama called on Wheeler in November to adopt strong net neutrality rules over broadband and wireless ISPs, including reclassification as public utility service providers under Title II of the 1996 Telecommunications Act. Wheeler did just that in February via the FCC’s new Open Internet Order, allowing the agency to regulate ISPs like telephone networks and ban traffic throttling, blocking or prioritizing — a move for which Public Knowledge and other advocates praised Wheeler.

“That was more meaningful than you could possibly know, with one exception — comparing me to Nixon? Wheeler joked, admitting he’s “always scared” when Kimmelman sits down in his office because the Public Knowledge president “knows more about it than I do.”

“James Madison, in one of the Federalist papers, said that, ‘Ambition must be made to counteract ambition,'” Wheeler — the first FCC chairman to keynote Public Knowledge’s IP3 Awards — said. “And the way this government would work would be through debate, through conflict, that would wear down those facts that aren’t true and bring out the opportunity to find not only truth, but also where consensus might be.”

“We cannot have debate, we cannot have the essence of how Madison said this government would work without organizations like Public Knowledge. There is plenty of ambition on the other side of issues. There is plenty of ability to speak out. Plenty of voices, which many times are presented as ‘independent,’ but aren’t,” Wheeler continued. “But the ability of Public Knowledge, Free Press, Common Cause — that ability keeps the process on the straight and narrow. So I’m here to salute you for the job you do in making sure that ambition is countered with other ambition representing people.”

“I’m a little surprised that Public Knowledge would actually ask me to come here today since I stole Gigi Sohn,” Wheeler said about Public Knowledge’s former president and CEO of more than a decade, who joined Wheeler’s staff as an external affairs counselor in November 2013 — right as the net neutrality battle was switching into high gear.

“The pope actually visited Tom Wheeler today,” Chip Pickering, CEO of COMPTEL — another lobbyist group in support of net neutrality, and this year’s Internet Protocol award winner — said. “Tom Wheeler talked to him, gave him the latest and the greatest smartphone, and he said, ‘Look — I believe in a higher authority, a higher power, and he is on speed dial. So whenever you need it, just push the button.'”

“So the pope left, and said, ‘I’ve got to push the button.’ And Gene answered,” Pickering joked, hinting at the influence Public Knowledge has at the FCC.

Should the FCC lean the same way on business broadband as it did in the broader net neutrality fight, ILECs could be forced to adhere to FCC regulatory standards in setting the rates they charge CLECs to borrow their networks — a possibility ILECs describe as regulatory overreach and a disincentive to expand and update their networks, or for CLECs to build their own.

If the FCC submits to the same influence on business broadband as the Open Internet Order, the party may only just be starting for net neutrality advocates and their allies in government.