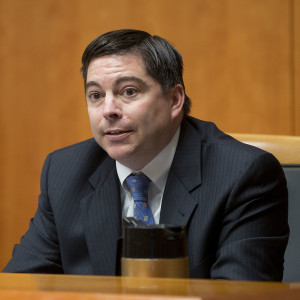 One of two Federal Communications Commissioners to vote against the agency’s net neutrality regulations last year said Thursday it was “disturbing” to learn Netflix, one of the rules’ chief advocates, has been throttling traffic to customers for years.

“There is no way to sugarcoat it,” Republican FCC Commissioner Michael O’Rielly said during a speech at the American Action Forum Thursday. “The news is deeply disturbing and justly generates calls for government, and maybe even congressional, investigations.”

News broke last week that Netflix, the face of calls for net neutrality rules banning paid Web traffic prioritization, content blocking and data throttling, has been throttling downloads to customers on AT&T and Verizon networks for the last five years — networks the video streaming service itself accused of throttling customers prior to the rules’ adoption in 2015.

“While the FTC may have grounds to scrutinize Netflix video throttling, let’s accept the factual point that Netflix never violated the commission’s net neutrality rules enacted last February,” O’Rielly said referring to the 2015 Open Internet Order. “So there is no net neutrality violation to explore.”

The order — responsible for establishing the three bright line rules — only applies to Internet service providers, and leaves edge providers like Netflix, YouTube and Amazon under the jurisdiction of the Federal Trade Commission, where the video streaming service could be subject to an inquiry.

That doesn’t mean the FCC has no role to play, O’Rielly said, recounting how it was Netflix “crying wolf” to the commission that helped lead to “an overhaul of the entire communications landscape” to stop the very practice Netflix itself was engaged in.

Such actions “demand commission attention,” according to the Republican.

“A company cannot knowingly make misrepresentations and inaccurate statements before the commission. In fact, doing so violates commission rules intended to protect the integrity of the commission and our decisions,” O’Rielly said, suggesting the FCC should go back through Netflix’s filings to the commission in support of net neutrality.

“It appears that Netflix made accusations of wrongdoing by ISPs, all the while knowing that its own practices were one of the causes of consumer video downgrading,” he said.

Under FCC rules any entity found to be knowingly supplying inaccurate statements or information to the commission for rulemaking consideration could receive a penalty as minor as a warning or as major as a ban from participating in future proceedings.

The commissioner cited the disclosure as evidence the rules shouldn’t be applied to any sector of the online ecosystem, adding the “revelations call into question the entire foundation and rationale for the net neutrality decision,” since Netflix was an active participant and a rallying point for public support of the rules.

“Certainly, the entire interconnection regime was predicated on the fears of anti-competitive peering and gatekeeper status
concocted by Netflix,” O’Rielly said. “And yet, at the same time it was making these claims, Netflix, itself, was engaged in highly suspect behavior.”

The Republican said it would be a “colossal mistake” to heed to calls of some ISPs to subject edge providers to the same rules as a result of Netflix’s hypocrisy — a proposal that would only succeed in “dragging everyone into the abyss.”

Last week the American Cable Association, which represents a collection of smaller cable providers, called on the FCC to subject edge providers like Netflix to the same rules ISPs must adhere to.

“ACA is disappointed, but not surprised, that Netflix used its immunity from the FCC’s net neutrality rules to engage in this practice,” the trade group said in a statement. “In light of this revelation, ACA calls on the FCC to initiate a notice of inquiry into the practices of edge providers and how these companies can threaten the openness of the Internet.”

The commissioner said he wasn’t surprised to hear ISPs calling for an equal application of the rules.

“The solution to unnecessary regulatory burdens and overreach is not to subject everyone to them,” O’Rielly said, “but to reduce them for all.”

Since the disclosure last week Netflix has maintained its limited video quality to subscribers on AT&T and Verizon mobile networks to keep them from exceeding their data caps, the company claims. Netflix did not limit downloads on smaller wireless providers Sprint or T-Mobile.