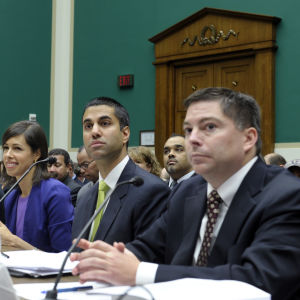 Posted to Technology May 18, 2016 by Giuseppe Macri

Federal Communications Commissioners on both sides of the aisle gave starkly different views and expressed surprising agreement on multiple regulatory proposals before the commission at a cable and Internet conference Tuesday, where Democrats said the agency’s newly proposed rules are open to input, and Republicans said the opposite.

The full Republican and Democratic factions of the commission — minus FCC Chairman Tom Wheeler — sat down to talk about the agency’s proposal to “unlock” the set-top box, install new privacy rules for Internet service providers and the rulemaking process overall under Wheeler’s reign at the Internet and Television Expo (INTX) in Boston.

“We want to make sure we understand the consequences of our proposal,” Commissioner Jessica Rosenworcel, one of the FCC’s three Democrats, said of Wheeler’s set-top box proposal during a taping of C-SPAN’s “Communicators” series at the INTX 2016.

While Rosenworcel said she was keeping an open mind on the proposal, the commissioner added the agency has a responsibility to ensure consumers have competitive options in the TV navigation device marketplace, as mandated by Congress.

In February the FCC, citing a congressional survey, advanced new regulations that would compel cable providers to make their programming available on third-party set-top boxes, giving consumers a choice to buy a box from a company like Google instead of renting it monthly from cable providers like Comcast or Verizon.

Commissioner Mignon Clyburn, Rosenworcel’s Democratic colleague, said just because a rulemaking is proposed “doesn’t necessarily mean that every word is adopted” in the final regulations, and described the rulemaking process as more “interactive.”

“While I know there’s a lot of emotion and people on various sides of the fence, the fact that we’re having this conversation and not passing down any edicts speaks well of this process,” she added.

“It’s another case of sentence first, verdict later,” Pai said, adding he believed the decision had “already been made,” and that Wheeler’s office “is not open to different points of view.”

O’Rielly expressed the same skepticism, and described the current proposal as “cooked.”

“I believe it’s already done,” he said. “At the end of the day, this proposal put forth by the chairman is what’s going to be voted on. I predict it will happen in October.”

The crowd at Tuesday’s panel, hosted by cable and telecom lobbying heavyweight the National Cable and Telecommunications Association, erupted in applause when O’Rielly said he’d “take the current proposal and throw it in the garbage.”

“That’s where it belongs,” he added.

Democrats were more willing to concede the agency’s new consumer privacy standards for ISPs could use some tweaking.

“I do believe that this is the kind of subject that is complicated and would benefit from a longer rulemaking,” Rosenworcel said, pointing out there were 500 questions asked of the agency about the proposal by stakeholders.

In March, Wheeler proposed new regulations to govern how ISPs handle user data, including limitations on when ISPs can share or sell user data — an effort aimed at giving customers more control over their privacy and security.

Internet service providers opposed to the rules say they’ll grant an unfair advantage to edge providers like Google, Facebook and Amazon, all regulated under the Federal Trade Commission’s case-by-case jurisdiction instead of the specific rules — including an opt-in requirement consumers must agree too — proposed by the FCC.

The agency recently denied a request by stakeholders for more time to argue the proposal.

“So why is the chairman saying, ‘Absolutely not, we are not going to have any more time?'” O’Rielly asked. “Why won’t he listen to three of us that agree that we should have more time on such a complicated subject matter?”

Pai, who’s repeatedly testified before Congress on Wheeler and the Democrats’ supposed habit of leaving Republican input out of proposals, said he didn’t expect the privacy proposal to turn out any differently.

The Republican commissioner said it’s “pretty clear from FCC leadership that the writing is on the wall,” but added commissioners will still “talk about it.”

Pai said it was time for an overhaul to the agency’s rulemaking process overall — something the Senate committee charged with overseeing the agency advanced via legislation in April.

“We should allow every commissioner’s office to have a full and fair opportunity to have his or her views known prior to a commission vote,” Pai said, adding some basic reforms would go a long way to improving “transparency and accountability.”

“But unfortunately the FCC leadership has denied those proposals at every turn,” he said.