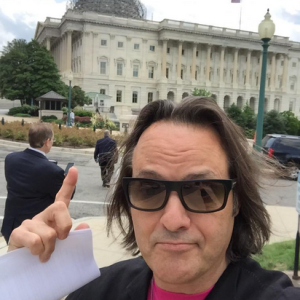 T-Mobile CEO John Legere on a lobbying visit to Washington

The Federal Communications Commission released the rules for its upcoming airwaves auction Thursday amid an ongoing battle between wireless providers AT&T and T-Mobile, both of whom spent the week lobbing attacks at one another over a request by T-Mobile to set aside more spectrum for smaller carriers exclusively and to bar giants AT&T and Verizon from bidding.

“There is some serious shit about to go down in D.C.,” T-Mobile CEO John Legere warned wireless customers in a recent YouTube video. “If you’re one of the 180 million Americans out there using a smartphone and you’re not pissed off right now, then you’re not paying attention — but you need to.”

At the center of the dispute is T-Mobile’s request for the FCC to expand the low-band spectrum available exclusively to smaller providers from 30 to 40 MHz in next year’s 600 MHz spectrum auction, when the agency will open up bidding on airwaves bought back from broadcasters and sell them to wireless providers to keep up with the U.S.’s growing demand for heavy bandwidth mobile applications like streaming video, music, navigation, and more.

As the largest carriers in the U.S., AT&T and Verizon will be excluded from bidding on spectrum in markets across the U.S. where they already possess more than 45 MHz of low-band spectrum. The so-called “duopoly,” as the companies have been described by T-Mobile CEO John Legere, oppose T-Mobile’s request.

“The recommendation from the chairman is to keep the reserve where it is — in other words, to deny T-Mobile’s request to increase the reserve,” the official said. “The chairman has spoken about how the incentive auction and the mobile spectrum holdings was a balancing of factors, and he continues to believe it’s a very well balanced approach.”

The dispute amped up this week in the form of a request by T-Mobile for the FCC to block AT&T’s purchase of 700 MHz spectrum in parts of rural Kentucky, Ohio and West Virginia, where T-Mobile said “AT&T will prove far more able to exclude competitors, raise their costs, damage their businesses and ultimately lessen competition.”

“[T]here’s this thing called ‘spectrum,’ the invisible wireless airwaves that transport information to the palm of your hand,” Legere wrote in a T-Mobile blog post last week. “It is the lifeblood that powers all of our wireless devices. Companies like T-Mobile buy this spectrum at government auctions so we can build bigger, faster and better wireless networks for our customers.”

“Spectrum is valuable, and there is a finite amount… And right now, AT&T and Verizon are feverishly protecting their wireless duopoly by hoarding spectrum at the expense of American consumers. They are trying to control the Federal Communications Commission like they do these airwaves, and I think it’s important that consumers really understand what is at stake.”

The three licenses AT&T wants to purchase from East Kentucky Network would give the carrier an additional 12 MHz of lower 700 MHz spectrum, and a total between 113 and 145 megahertz in the three Cellular Market Areas — 43 to 55 of which would be below the 1 GHz spectrum.

According to FCC rules minted last May, any carrier gaining control of more than one-third of the spectrum below 1 GHz in a given market will be subject to a review to ensure market competitiveness. In its complaint, T-Mobile points out AT&T’s proposed purchase makes it subject to the review, and adds that T-Mobile only holds about a 4-percent market share in the area.

T-Mobile stated it’s currently the smallest competitor in the area, and it needs more low-band spectrum to compete with larger carriers.

Marsh argued the spectrum AT&T wishes to purchase isn’t currently in use, and as such, wouldn’t affect competition. Marsh added T-Mobile already has 20 to 30 MHz in the markets in question, but only has “limited plans” to expand rural coverage.

“Finally, if T-Mobile wants low band spectrum for these markets, it could buy the 700 MHz A block spectrum (which is largely undeployed in these markets) and deploy it — a path it is following for many other markets,” Marsh said. “Yet, T-Mobile chooses to do none of these. Instead it is spending resources on trying to block AT&T from investing in rural America. I guess un-investment in un-urban markets is the un-carrier thing to do.”

“The funny thing is that AT&T has a long history of promising to build out broadband to consumers — then failing to deliver on those promises — and not just in rural areas, but in urban areas as well,” Levin wrote.

“Take AT&T’s promise in 2006 that if the FCC would just approve its mega-merger with BellSouth, AT&T would make broadband Internet service available to every single household in the market area. Six years later, residents in rural Mississippi were still waiting for high speed Internet. That’s a long time to wait for a webpage to load.”

Levin added that AT&T’s description of the auction reserve as a “set aside” that “picks winners and losers” is especially “laughable,” given AT&T and Verizon both will be eligible to bid on spectrum in three-quarters of the country.

“The truth is that the spectrum reserve is a contingent, market-based safeguard to prevent the two dominant carriers that already control three-quarters of all low-band spectrum from choking off access to the last remaining amount of this critical input resource,” Levin said.

The updated rules also add a 15-percent bidding credit for rural carriers with 250,000 subscribers or fewer, a cap on credits, and prohibit joint bidding agreements like the one used by DISH Network in the last auction to acquire small business credits through shell providers to purchase more spectrum.

Under the new rules, multiple applications for credits from companies with a common controlling interest will be prohibited, as well as joint-bidding agreements that involve a shared strategy to purchase spectrum. Only small businesses will be allowed to form consortiums, receive business credits and bid as a single joint entity.