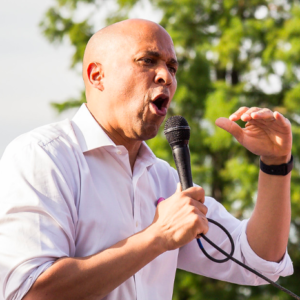 On Monday, Sen. Cory Booker brought the issue of gun control front and center in the 2020 presidential race with his aggressive proposals for gun bans, confiscation and federal licenses.  But with Speaker Nancy Pelosi exhorting Democrats to “own the center left, own the mainstream,” is this where New Hampshire Democrats want the 2020 debate to be?

Among the items in Sen. Booker’s 14-point “Plan to End the Gun Violence Epidemic” are:

— An assault weapons ban, with a “reasonable time period” for current owners to turn their weapons into the government before facing possible prosecution.

–A ban on high-capacity magazines.

–Limits on the number of legal gun purchases.

–“Declaring war on the NRA.”

The federal licensing part is particularly tricky.  The process of getting a gun owner’s license would include an interview with a federal agent. Here’s how Booker describes it:

“Individuals could seek a gun license at a designated local office, widely available in urban and rural areas, similar to applying for or renewing a passport. They would submit fingerprints, provide basic background information, and demonstrate completion of a certified gun safety course.”

“The FBI would then verify submission of required materials and run a comprehensive background check before issuing a federal gun license, after which the license-holder could freely purchase and own firearms. The license would be valid for up to five years before renewal with regular, automatic checks to flag non-compliance with license terms.”

According to Vox.com, the specifics of the licensing process would include a fee, a photo, fingerprints and a one-on-one interview with a federal agent, similar to requirements in states like Massachusetts and New Jersey.

Banning guns. Confiscating guns. Federal interviews to own a gun.  This isn’t the usual Democratic call for “common-sense gun reform.”  But as Igor Volsky, anti-gun activist and author of the book Guns Down: How to Defeat the NRA and Build a Safer Future with Fewer Guns told Vox, “We need to ask for what we really want, not what we think moderate, centrist voters would go for. In the book, I argue that should be a future with fewer guns.”

And so this weekend, this weekend, Sen. Booker will be hitting New Hampshire voters with the message  “You need a license to drive a car, you should need one to own a gun.”

Is this the direction New Hampshire Democrats should go?

Granite Staters are more likely to own guns or live in a home with a gun owner (47 percent)  than the average American. New Hampshire ranks third when it comes to the number of guns per capita. It’s a relatively rural state with a significant hunting and sport shooting culture. And, contra Cory Booker, it also has the lowest homicide rate in the United States. New Hampshire’s “epidemic” is opioids, not gun violence.

Baroody was one of the 10 New Hampshire House Democrats who joined the GOP majority in 2017 to pass so-called “constitutional carry,” which allows lawful gun owners to carry a concealed firearm without any additional regulation or licensing. Baroody says that “there are several Democrats in the legislature’s Sportsmen’s Caucus who are more open-minded about guns.”

Other New Hampshire Democrats support gun ownership and are uncomfortable with Booker’s approach but were unwilling to go on the record.

And perhaps with good reason.

And Democrats are definitely open to “forward-leaning” gun control.  New Hampshire Democrats overwhelmingly supported every gun restriction bill brought to the House floor this session. Nationwide, a third of Democrats tell pollsters they’re prepared to repeal the Second Amendment entirely--a notion that has its advocates here in New Hampshire as well.

Democrats are far more open to the idea of repealing the Second Amendment than Republicans and independent voters, and progressive Democrats are both energized and, thanks to Michael Bloomberg’s money, well funded.  Playing the gun control card makes sense.

But what happens in November when President Trump is running for re-election against a candidate who has embraced gun confiscation and mandatory interviews with federal agents?  Will anti-gun sentiment carry the day, or will it feed the GOP’s meta-narrative that the entire Democratic Party has missed the target–wide left?