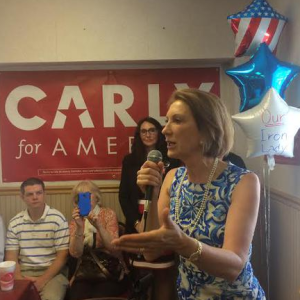 Carly Fiorina campaigns in South Carolina on August 9, 2015 (via Twitter)

Fiorina Goes From Underdog to Taking on Trump

Former Hewlett-Packard CEO Carly Fiorina became one of the most viable 2016 presidential candidates in the minds of many Republicans after an undisputed win during last week’s second-tier debate on Fox News — a performance that’s made her the latest target of GOP polling frontrunner Donald Trump.

Fiorina wasted no time hitting back on “Fox News Sunday” in her response to a question from Chris Wallace about conservative political blog Red State’s decision to withdraw Donald Trump’s invitation from an annual gathering on Saturday — a reaction to comments Trump made about Fox News’ Megyn Kelly following Thursday night’s debate.

“Presidential campaigns are about watching someone under pressure and over time,” Fiorina told Wallace. “And so in the debate that we were just talking about, you asked some tough questions too. You talked to Donald Trump about his record of bankruptcy. But I didn’t notice Donald Trump insulting you for 24 hours. There’s no excuse for this.”

“I don’t think you get things done by insulting everyone,” Fiorina continued. “I have a track record of getting things done.”

Trump claimed Kelly targeted him unfairly during Thursday night’s debate with questions about his history of offensive comments toward women.

“Mr. Trump: There. Is. No. Excuse,” Fiorina tweeted Saturday.

Red State’s Erick Erickson said he didn’t “want my daughter in the room with Donald Trump” on Saturday night, and during a Sunday interview on CNN’s “State of the Union,” Fiorina said “women understood” Trump was referring to menstruation when he made the comment.

“[A]s I made my way up in the … male-dominated business world, I have had lots of men imply that I was unfit for decision making because maybe I was having my period,” Fiorina said.

“When I started this campaign, I was asked on a national television show whether a woman’s hormones prevented her from serving in the Oval Office,” Fiorina continued. “My response was, can we think of a single instance in which a man’s hormones might have clouded his judgment?”

“I think women of all kinds are really sort of horrified by this,” Fiorina told host John Dickerson on CBS’ “Face the Nation” Sunday. “Mr. Trump got asked tough questions by a lot of people on Thursday night, but he chose to attack Megyn Kelly.”

“I think you cannot have a president who is thin-skinned,” the HP CEO added.

“I just realized that if you listen to Carly Fiorina for more than ten minutes straight, you develop a massive headache,” Trump tweeted in response. “She has zero chance!”

RELATED: Here’s What You Won’t Hear at Thursday’s Debate — Because These Candidates Won’t Be Allowed on Stage

Instead, Fiorina walked away as the champion of a 5 p.m. happy hour debate on the network, according to virtually every major news outlet and Google.

“Maybe it’s because I haven’t given money to the foundation or donated to his wife’s Senate campaign,” Fiorina continued.

The former HP chief’s recent upswing has also invited a new round of criticism regarding her own past, including her firing from the top spot of one of Silicon Valley’s biggest PC manufacturers after a merger with Compaq that ended in layoffs for 30,000 employees.

“I was fired in a boardroom brawl. And you know why?” Fiorina told Jake Tapper on “State of the Union” Sunday. “Because I challenged the status quo. It is what leaders must do. And when you challenge the status quo, when you lead, you make enemies. It’s why so few people lead.”

Fiorina led the company from 1999 to 2005 — a time period she previously described as “the worst technology recession in 25 years.”

The former HP CEO added her firing put her in good company, including that of Oprah Winfrey, Steve Jobs, Walt Disney and Michael Bloomberg.