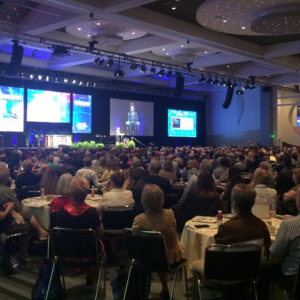 While Ben Carson came out on top of Sunday’s Republican presidential straw poll hosted by the Western Conservative Summit in Denver, 2016 underdog Carly Fiorina was the surprise upset of the weekend conference, where the former Hewlett-Packard CEO came in second ahead of Texas Sen. Ted Cruz, Kentucky Sen. Rand Paul and Wisconsin Gov. Scott Walker.

The upset came as major surprise in the lineup of high-profile 2016 candidates including Walker, who was in attendance and finished in third with 192 votes. Cruz, whose father Rafael Cruz gave a speech in support of his son at the conference, came away with 100 votes, Paul with 34, Florida Sen. Marco Rubio with 24 and former Texas Gov. Rick Perry with 20.

The former HP CEO came into the weekend conference largely unknown, but shook up attendees with a Saturday morning speech that included quips about the criticisms of a female president, her views on national security, and a jab at Democratic frontrunner Hillary Clinton.

Fiorina told the crowd she was recently asked whether she thought hormones would affect a woman’s ability to serve as president.

“Ladies, here’s a little test — can any of you think of a single instance in which a man’s judgment might have been clouded by his hormones?” Fiorina joked. “Any at all? Including in the Oval Office?”

Fiorina said technology was the key to getting voters reengaged in the political process and breaking up the entrenched “professional political class” that has dominated Washington on both sides of the aisle for decades.

“I would go into the Oval Office on a regular basis in those weekly radio addresses or in those Oval Office addresses and I would would ask every person in American, ‘Take out your smartphone please, let me ask you a few questions,’ Fiorina said. “Do you believe that we actually should know how your money is being spent? Do you believe that we should ask every single government agency to justify every single dollar spent every single year? Press one for yes, two for no.”

Since announcing her campaign earlier this year, Fiorina has touted her Silicon Valley experience and tenure as the CEO of HP as one of her standout qualifications for the job, especially in light of the recent technology issues plaguing national security.

“This has to be a central part of any homeland security strategy,” Fiorina recently told Bloomberg about the massive hack executed against the White House Office of Personnel Management, which compromised the personal information of millions of current, former and prospective federal employees, contractors and security clearance wielders. “The Chinese have had a long-term effort to hack into our databases and systems, which suggests that we should have been on guard for a very long time.”

“You have to have a consolidated command that has the accountability, the responsibility, for protecting the security of all government systems and databases,” Fiorina said. “You can’t have this piece-mealed throughout government.”

Fiorina’s opinion mirrored that of congressional leaders in recent weeks calling for OPM Director Katherine Archuleta’s resignation, many of whom allege she isn’t qualified to safeguard the data of millions of federal employees.

“You have to have exceedingly competent people who are there because of their particular expertise, not simply there because they’ve been in government long enough to get there,” Fiorina said. “Not everybody has the skills to do this work.”

“We now know that the inspector general of OPM, Office of Personnel Management, told the director several months ago you have two systems that are highly vulnerable, you need to take them down,” Fiorina said during a recent radio interview.

“They refused to accept that recommendation. So yet again, this is a self-inflicted wound. We need not bureaucracy to deal with this. We need a concerted, consolidated command within the federal government that is focused solely on this, has responsibility and authority across the federal government, reports to the White House or to the Department of Defense or Department of National Intelligence — somewhere where it’s taken seriously.”

“Technology is a tool, but it is also a weapon that can be used against us.”