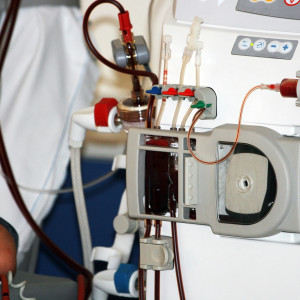 Full disclosure, this column is related to my professional work, my efforts to help a client. That client makes a medical device used for home hemodialysis (HHD). Hemodialysis is the treatment used to assist individuals suffering from severe kidney disease.

The frustration in not being able to see a solution achieved to solve a simple problem more than befuddles me. It makes me angry. So, what follows is an attempt to have a little more light shown upon how stupid our government can be, and the pain that stupidity can occasion to the most vulnerable in our midst.

Every year, the Centers for Medicare and Medicaid Services (CMS)—a part of the Department of Health and Human Services—issues a rule that determines what sorts of items will be covered, and in what amounts, by CMS for those requiring medical treatments for their severe kidney disease. In government parlance, this is the rule for End Stage Renal Disease (ESRD). In the business, this is known as “the bundle.”

One study showed that 90 percent of nephrologists (kidney doctors) would choose a home therapy option for themselves, if they were medically suited for this option. Most would choose home hemodialysis. As of today, only two percent of dialysis patients utilize HHD.

There are good reasons these doctors would prefer a home option. Other patients go to large dialysis centers, three times a week, for three hours for each treatment. Their lives revolve around these treatments. These patients are low in energy, must endure tremendous ups and downs for their hearts and other organs.

On the other hand, those using HHD, dialyze six times a week, on their own schedules. HHD patients use less medicine, are much healthier than those going to centers, and simply enjoy a better quality of life. Some have even run marathons, a prospect unthinkable for those going to centers.

It is important to remember that not every kidney patient is a good candidate for a home option. Nephrologists estimate that about 12 percent of all patients should use HHD. Still, if the number should be 12 percent, but only two percent are using HHD, something must be amiss, you must be thinking. And, you would be right.

What is the problem? It really is not very complicated. Even more maddening, it is a simple thing to fix. In order to utilize HHD, a patient (and a second “caregiver”) must undergo training. HHD involves sticking a needle into your arm, six times a week to get the medicine that allows you to function as close to normal as possible. This training requires five hours of time from a highly trained nurse. As of today, and as specified under the rule just finalized for next year, CMS will only reimburse 90 minutes of the time of a nurse involved in the training.

The letter law, and CMS regulations, require that every effort be made to promote the use of home options. However, one study showed that as few as 20 percent of patients recall being told of this option. When you begin treatment, it is not unlike buying a car or a home. A lot of papers are pushed in front of you that get signed by most folks with little real knowledge of what is happening. So, kidney patients breeze through this part of the process not realizing all their genuine options.

Given the CMS rule on reimbursement for patient training, this is as predictable as hot summers in Georgia. Although, over time, HHD patients are moneymakers for the large centers that provide traditional dialysis to the vast majority of patients, the lack of full reimbursement for patient training for HHD, requires them to wait to achieve that outcome. Study after study confirms the reality that lack of full reimbursement is the biggest obstacle for patients accessing HHD. Reasonably, the large centers do not want to wait for their money. In fact, only about 40 percent of dialysis centers even offer HHD as a treatment option.

At this point, you may be wondering just what it would take to solve this thorny problem. Here is what exasperates the most. If every patient who became a HHD patient had 100 percent of the patient training costs reimbursed, it would amount to approximately 10 million dollars. That is not a misprint, it is million with a “m.” This amount is so small that it does not even appear in the CMS budget as a rounding error.

The problem can be solved for a pittance. Not only that, not a dime of new spending is required, since the money can be found from “leakage” alone (money not spent for other items). In addition, because the money can be found from existing dollars, it means the infamous “bundle”—an item near and dear to the big dialysis centers can remain untouched.

This problem is so simple to solve, so not a matter of ideology or partisan interests that in 2013, 38 members of the House of Representatives wrote CMS asking them to do the right thing. Those members ranged from John Carter, Walter Jones, and Tom Marino on the conservative-Republican side to Jim McDermott, Andre Carson, and Nikki Tsongas on the liberal-Democratic side.

This year, there was again a bi-partisan expression of support for CMS to fix the problem once and for all. On the Senate side, Iowa’s Charles Grassley has long championed full reimbursement. While bemoaning the fact this was the third consecutive year that a letter was required, he said: “CMS can and should pay appropriately for the actual time it takes to provide this service, which is essential to allow patients to go home safely with their care.”

Under the category of more full disclosure, the column has its title—For the Want of a Nail—because it is the phrase I was using while urging support for CMS to fix this problem. My client informed me that the young people to whom this message was being delivered had no idea what that meant. So, for those who do not know, there is an old fable where a kingdom was lost due to the want of a nail to hold up a critical structure.

And, in 2015, we once again are still seeing the want of a nail—the full reimbursement of patient training costs for HHD—creating terrible and large outcomes. This is because the final rule for ESRD was just issued last week.

Here is what that rule said on page 131. “While we have heard different things about whether or not the home dialysis add-on-payment adjustment is adequate, we are not in a position this year to address the commenters’ concerns. We are, however, committed to conducting further analysis of the home dialysis training add-on payment adjustments and will consider making appropriate changes to the adjustment in future rulemaking” (emphasis added).

Out of curiosity, what in the devil does “not in a position this year” mean? Are they lying down and cannot get up, use their brains and solve the problem? What “further analysis” do they need? Studies have repeatedly confirmed this as the single biggest obstacle to access to HHD.

The money involved is so small CMS cannot even locate it as a rounding error. It requires no new spending. It can be done in a way the bundle is untouched, leaving the big providers of in-center treatments whole. The solution has widespread and bi-partisan support. The solution is recognized as the overwhelming thing CMS needs to do according to the comments they received.

When government cannot do something this simple and right, it is another of the reasons Americans conclude the government is run by fools. The problem is not facts or attaining the knowledge to ease the suffering of those enduring horrible kidney disease. The problem is a bunch of bureaucrats who refuse to do what is clearly right. It is maddening.