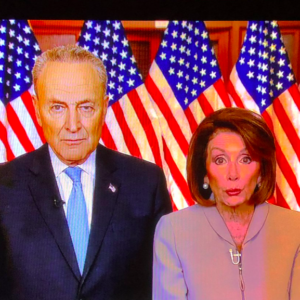 Forget the #Resistance, Chuck; Focus on Your Job

Criticizing the Trump administration’s “persistent transgressions,” Schumer recently claimed “the very foundation of this republic is at risk.” He also accused Trump of “abus(ing) the powers of his office and betray(ing) the public trust for personal political gain,” urging Congress to proceed with its impeachment inquiry.

Of course, Schumer has no problem with exploiting the Ukraine nothing-burger for “personal political gain,” turning it into an excuse to undermine a president with whom he vehemently disagrees.

Chuck, why don’t you just focus on your job? While he panders to his anti-Trump base, Schumer is presiding over a logjam at the Federal Election Commission, which now lacks the legal minimum of four commissioners to make any high-level decisions. As the Center for Public Integrity’s Dave Levinthal explained, the FEC can’t even conduct meetings, let alone issue new rules on campaign finance or vote on the outcome of existing investigations. In other words, the FEC has “effectively shut down.”

Why? Because of Chuck Schumer.

He has consistently refused to honor the tradition of the Senate minority leader recommending names to be nominated to nonpartisan and bipartisan commissions, including the FEC. The agency has traditionally filled two seats at the same time, pairing a Republican and Democrat, each recommended by the leaders of their respective parties — the president and the opposing party’s Senate leader. However, Schumer has yet to make a serious nomination to fill the Democratic vacancy at the FEC, or replace the existing Democratic commissioners on long-expired terms.

This intentional logjam serves only one purpose: To give Schumer and other Democrats a built-in excuse to complain about the very problem they have created, or blame it on Trump.

And complain, they have. Schumer’s spokesman recently proclaimed, “Congress should address this issue quickly because we need a fully functioning FEC.” Yet he failed to acknowledge the ball is in his boss’s court.

The status quo is simply unacceptable. Chairwoman Ellen Weintraub, an overzealous Democrat, is currently 18 years into a six-year term, which expired in 2007. Independent Steve Walther has served nearly as long, and yet the FEC is entirely incapable of enforcing the campaign finance laws on the books.

Nonetheless, Democrats like Schumer continue clamoring for “campaign finance reform” — that is, restrictions on free speech and political expression they disagree with. For years now, Schumer has sought to reduce spending in the political arena, by which he’s meant targeting conservative speech that opposes his policies.

His routine denunciation of “dark money” and “special interests” is really just a smokescreen for a Big Government approach to campaign finance, barring individuals from participating in the political process — especially if they support Republicans who oppose Schumer’s policies.

Unfortunately, political pandering has done nothing to erase the deadlock at the FEC, or turn it into a functioning agency. In part because of Schumer, Hillary Clinton recently got away with an $84 million money laundering scheme — the largest campaign finance scandal in U.S. history — after the FEC refused to devote the adequate time and resources to properly investigate her alleged transgressions. Not surprisingly, Schumer remained silent on the Clinton machine’s illegal fundraising practices during the 2016 election.

If Schumer was truly serious about “campaign finance reform” — and holding wrongdoers like Clinton accountable — then he would actually do his job. But he isn’t, and he’s not.

Perhaps, Schumer is secretly satisfied with the status quo. After all, his campaign committee has raised more than $90 million since the 1980s, and hundreds of millions more for Democratic super PACs — the same “dark money” he publicly decries. If anything, today’s political system favors Beltway elites like Schumer, who have been swimming in the swamp for decades.

Whatever the reason for inaction, it is downright embarrassing. Worse, it is a dark blemish on the reputation of the Senate.

Forget the #Resistance, Chuck. Just do your job.