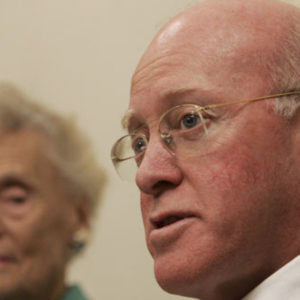 Gardner: A Partisan NH Secretary of State “Is A Real Problem” for FITN Primary

Democrat Bill Gardner, the 42-year veteran Secretary of State, tells NHJournal that having an openly-partisan politician in the office “is a real problem.”

“In this job, it’s all about trust,” Gardner said.

“We’re not like other states, like Georgia and Florida, where the county officials do the recounts and send the results to the state,” Gardner said. “I oversee every recount. We’ve had about 550 of them since I’ve been in office. Thirty-two of them came down to a one-vote margin, and 11 ended in ties.  How do you call balls and strikes if you’re partisan? I have to look at ballots and see if there’s an erasure? People have to trust you.”

In a caucus vote last week, House Democrats named Colin Van Ostern their party’s choice for Secretary of State by a margin of 179-23.  Von Ostern, the Democratic nominee for governor in 2016, has been openly partisan in both his criticism of Republican officeholders and in his pursuit of the Secretary of State’s position. He repeatedly attacked Donald Trump, both as the GOP nominee in 2016 and as president.

What does that mean for New Hampshire’s unique position as the home of the First in the Nation primary? Does it matter if the Secretary of State is partisan?

“It is important to be nonpartisan,” Gardner told NHJournal. “It’s important to be able to talk to each national party’s committee about our law that says our primary has to be at least seven days before any other state.

“It mattered during the years when Delaware and Arizona said their primary was going to be the same day as ours.  It mattered in 2007 when the head of the South Carolina Republican Party came to our state house in Concord to announce the date of their primary.  Like I said–it’s about trust, and it matters.”

Gardner again reiterated that he has kept his pledge “not to use this office as a stepping stone. I’ve never run for office and I never would.  My opponent has only pledged not to run ‘in 2020,'” Gardner noted.

Gardner has the support of both prominent Democrats like former Gov. John Lynch (“Bill has done an amazing job of protecting the New Hampshire first-in-the-nation primary and a wonderful job overseeing the elections over the years since 1976.”) and the chairman of the NH GOP Wayne MacDonald who says Ostern “represents a significant threat to our quickly approaching first-in-the-nation primary as well as a radical approach to election processes and procedures.”

“Bill Gardner has, when necessary to protect our primary, politely but firmly stood up to governors and party leaders from New Hampshire and other states,” they wrote. “His non-partisan approach has earned the utmost respect and trust from leaders on sides here as well as in other states.”