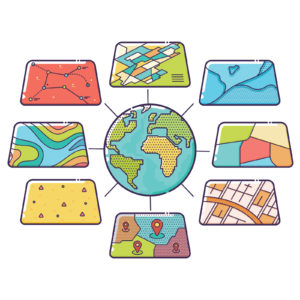 More than fifteen years after first hitting the market, the Advanced Placement Human Geography course remains one of the College Board’s fastest growing offerings with nearly 185,000 test-takers in 2016. Experts who have followed the assessment’s yearly double-digit growth say that the rise of the assessment’s popularity coincides with increased career opportunities for those with skills in Geographic Information Systems—an industry that has mushroomed with technological advancements and the proliferation of quality open source and commercial software programs.

Chris Tucker is the chairman of the board of the American Geographical Society, which is based in New York and bills itself as the oldest geographical society in the United States. Tucker, who spoke with InsideSources by phone, is not a geographer by training but has worked for a number of businesses and nonprofits active in the geography space. One of Tucker’s more recent projects, MapStory.org, allows users to create and edit maps on everything from avian migratory patterns to the political evolution of Central America.

Tucker attributes geography’s return to mainstream prominence in part because of the subject’s interesting perch at the intersection of history and the sciences. He also noted that free products coming onto the scene in the early 2000’s, like Google Earth, have “democratized” information in the space and opened the field to amateur exploration.

Perhaps more importantly for geography’s growth, however, is a spike in the market’s demand for geographically talented workers. While AP Human Geography is a good introduction to the field, those serious about working in the space should acquaint themselves with some of the more technical skills in areas like Geographic Information Systems, (GIS), or remote sensing tools, said Tucker.

“The same way that 20 years ago you could tell an employer, ‘I’m good at Excel, or I can take numbers and do interesting things with them,’ GIS has become the next wave,” he said, while also explaining that organizations from businesses, to nonprofits, to government agencies are hiring workers who specialize in geographical analysis.

“Whether its real estate, or local government, or transportation companies, there is an explosion in the number of jobs to apply those hard skills,” he said, using the example of a municipality that may want to review satellite data to check where new construction has occurred and verify that permits have been applied for and taxes have been paid.

To support the next generation geographers, the American Geographical Society is in its second year of running a fellowship program that trains AP Human Geography teachers in open source mapping software. The goal is to get the educators to become proficient in using the free applications and then sharing that expertise with students and colleagues.

The teacher-fellows are then encouraged to hold “mapathons” with their classes, which provide students the kind of hands-on active learning experiences that learning science experts increasingly say is most beneficial for knowledge comprehension and retention. Last year, for example, the fellows practiced by cooperating with the U.S. Census Bureau on a project to map out the areas in and around all of the U.S. national parks. In other cases, said Tucker, students are earning community service hours by remotely mapping rural areas in third world countries that are then used by aid organizations to deliver healthcare or food supplies.

In general, the availability of free or open source data platforms has not always been good news for the incumbents in other industries. Education publishing companies for example have been reeling in recent years from the competition of freely available or cheap web-based lesson plans. Tucker, however, does not believe that the same dynamic is at work in the geography space, saying that he thinks the public and private sides of the market are “feeding off one another” as the sector continues to grow.

On the educational side, Tucker said that his group and others are collaborating with the College Board to add another AP Geography class—one that would be more focused on the hard skills associated with GIS and the latest in GIS technology. Between the new courses and the more humanities-oriented course currently offered, the hope would be to prepare students with a solid foundation for a major in geography at the college level.

Tucker, whose academic background is in political science, signaled optimism that the field will continue to grow, if for no other reason than he believes that “a large swath of humanity is actually closet geographers—they love maps, they love navigation, and they are curious about the world around them.”