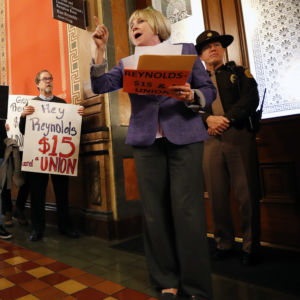 Though Iowa state executive candidates have until January 19 at 4:30 p.m. CT to file their campaign disclosure reports for the end of their 2017 cycles, data on contributions from federal and out-of-state committees from the Iowa Ethics and Campaign Disclosure Board (IECDB) shows millions are in play for the state’s 2018 gubernatorial election.

According to the data, left-wing Democratic candidate Cathy Glasson of Coralville hauled in nearly $2 million between May 2017 and the time of this article’s publication. Approximately $1.7 million of the approximate $1.9 million contributed comes from different branches of the Service Employees International Union (SEIU). Glasson herself is leader of the SEIU Local 199 union that represents health care workers at the University of Iowa Hospitals and Clinics. The SEIU Intl. Union Cmte. on Political Education contributed a total of approximately $1.556 million. Glasson’s contribution haul includes two independent expenditures totaling $43,918 from the Iowa Citizens for Community Improvement (Iowa CCI) Political Action Committee.

Glasson is largely considered a grassroots Democratic candidate, touring rural areas of the state as well as urban centers, and she received the endorsement and organizational support of Iowa CCI. Her campaign focus is following up with voters about her issues and encouraging network development through supporters bringing friends and neighbors to her meetings. Glasson supports a $15 per hour minimum wage, a Medicare-for-all healthcare system in the state, as well as a clean water plan that punishes polluters for damage to Iowa’s waterways. She also advocates for easier opportunities for employees to join and form unions. On Thursday, July 18, one of the nation’s largest progressive activist groups, “Our Revolution,” announced its endorsement for Glasson. The group formed in 2016 to carry on the work of Senator Bernie Sanders’ presidential campaign.

Glasson’s contributions in these categories are the highest among gubernatorial candidates from May 2017 to time of publication, including incumbent Governor Kim Reynolds, and have her sitting in a financially stable position going into a contested primary season that includes seven total candidates seeking the Democratic nomination. In fact, Glasson has just premiered her first television ad in the Des Moines market titled “Heart,” reported to cost six figures. In total, three Democratic candidates, including union attorney and Des Moines State Senator Nate Bolton, Glasson, and Fred Hubbell have television ads airing. With these campaign contributions, Glasson joins Des Moines CEO and Democratic philanthropist Fred Hubbell, who announced his campaign funding was over $1 million one week after he announced his bid for Iowa Governor in July 2017.

Glasson’s campaign contributions under these categories top fellow union advocate Boulton, who brought in approximately $350,377 in campaign donations in these categories. With one day left to file for state fundraising, it will be interesting to see how Iowa’s unions and workers’ associations have aligned themselves among the two.