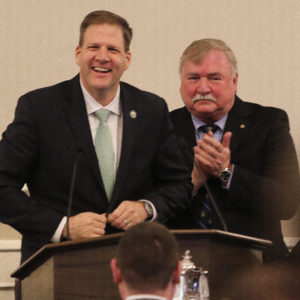 Gov. Sununu Gets Another Win As Democrats Agree To No-Tax-Hike Budget

Talking about the budget last week,  Gov. Chris Sununu told NHJournal he had drawn two lines in the sand: “I’m not going to raise taxes when we have a $200 million surplus, and I’m not going to sign a budget today that creates a structural deficit.”

On Tuesday, Democrats abandoned their demands for tax hikes and gave Sununu a budget that stayed inside the lines.

The most high-profile fight was over the push by Democrats to raise business taxes, an effort led by Senate Majority Leader (and 2020 gubernatorial candidate) Sen. Dan Feltes (D-Concord).  Their goal was to raise Business Profits Tax (BPT) and Business Enterprise Taxes (BET) back to last year’s higher rates.  Instead, Senate President Donna Soucy and Speaker Steve Shurtleff agreed to a compromise that left Sununu’s tax cut intact (BPT 7.7% /BET 0.6%) and builds in a tax-cut trigger that could lower rates even more (BPT 7.5%/BET 0 .5%) if revenues exceed 106% of projected revenue.

In a move designed to appease Democrats, the budget also includes a tax-hike trigger, raising rates (PBT 7.9%/ BET 0.675%) if revenues fall below 94 percent of projections. Republican insiders tell NHJournal that a drop in revenues that significant —  $150 million in tax collections — is unlikely. “The economy would have to s*** the bed for that to happen,” one NHGOP legislator said.

On the issue of the structural deficit, the results are less clear. “This budget reduces the structural deficit by 75% – a total of $70 million –  from the legislature’s proposed budget, ensuring that no programs will face funding cuts if an economic downturn occurs,” Sununu said. However, it does leave a $25 million deficit for future budget writers to face.

The argument from Sununu allies is that a deficit that small is manageable and won’t require significant spending cuts if a future downturn occurs.  The budget also adds another $5 million to the state’s Rainy Day fund and keeps the 2014 Medicaid Expansion deal in place.

And on social issues, Democrats abandoned their attempts to use tax dollars to fund abortions, agreeing to return the “Hyde Amendment”-style ban to the budget. The deal also compromises on a higher smoking age in “Live Free or Die” New Hampshire, banning adults from legally buying tobacco products until they turn 19, as opposed to the 21-year-old smoking age some Democrats sought.

It was a setback for a party swept to power in the legislature by a massive #BlueWave less than a year ago, but Democratic leaders tried to put on their own positive spin. “This budget preserves important Democratic priorities, including the largest investment in job training and public education in the history of our state that will advance educational opportunities for all and along with reinstating municipal aid will provide meaningful support to cities and towns and critical property tax relief to Granite Staters,” Speaker Shurtleff said in a statement.

Of course, that also lets Gov. Sununu run in 2020 as the guy who signed a budget with record education spending, too.

Democrats were always in a tough position, pushing for higher tax rates at a time of huge surpluses on behalf of programs like paid family leave that had a limited audience. Worse, the unity of the GOP minority in the legislature meant Democrats had little chance to force Sununu’s hand to accept a budget that crossed his lines.

This budget is so pro-Sununu, some longtime statehouse watchers wonder if the new class of progressive Democrats in the House–who were pushing a straight-up income tax just months ago– will vote for it. Answer: What choice do they have? With their party’s leadership on board, they won’t be fighting Sununu’s budget, they’ll be fighting a compromise budget. And what happens if they reject it?

Government shutdown. After all, why would Sununu agree to another short-term resolution when he’s got a Shurtleff/Soucy-backed budget in hand?

For Democrats who think this fight over higher taxes and more spending is worth a shutdown, this question: Haven’t you done enough to re-elect Gov Sununu already?