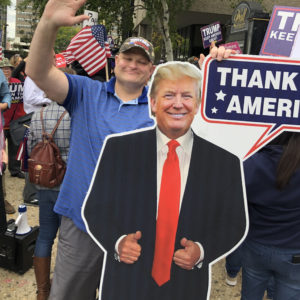 A Trump supporter rallies in Manchester, N.H. in October, 2019.
[IS] Opinions

Granite State GOP Going All In For Trump

President Trump’s poll numbers in New Hampshire may not be great with the electorate at large, but he continues to enjoy both record support among GOP primary voters and vocal support from the party’s leadership.

At an event launching their FlipTheNHHouse.com program to re-take control of the state House of Representatives, state GOP chairman Steve Stepanek and House Minority Leader Dick Hinch were asked if President Trump would help or hurt their chances.

“Donald Trump will help our efforts in 2020,” Hinch told NHJournal. “Donald Trump is still popular among the voters who supported him.”

Stepanek agreed, dismissing polls finding Trump underwater by double-digits as inaccurate and predicting a “red wave here in New Hampshire” thanks to Trump’s support and the NHGOP’s targeting of Democratic state legislators in Trump-leaning districts.

“There are over three months until New Hampshire votes, but an 81-point lead is very large,” CNN deadpanned in its reporting.

Meanwhile, New Hampshire Republicans are planning a major rally at the statehouse November 7 when Vice President Mike Pence comes to Concord to file the documents that will put Trump’s name on the GOP primary ballot. And Trump packed the Southern New Hampshire University Arena in August with a record-setting crowd of enthusiastic supporters.

Those numbers help explain why Gov. Chris Sununu, a pro-choice, pro-same-sex-marriage moderate Republican, continues to support President Trump even as fellow New England GOPers like Massachusetts’ Charlie Baker and Vermont’s Phil Scott call for his impeachment. So far it hasn’t hurt Sununu, who was re-elected amid the 2018 Democratic blowout in the Granite State and remains one of the most popular governors in the country.

But “surviving” Trump and winning with Trump aren’t the same thing. Republican legislative candidates have to run with an unpopular president at the top of the ticket, and do it in a state the GOP presidential candidate has carried only once since 1988. Not every NHGOP’er is as convinced that he’s going to help.

“Is Trump going to help us or hurt us? Nobody knows,” state Rep. Steven Smith (R-Charlestown) told NHJournal. “Nobody has done the analysis on this.”

Smith isn’t necessarily pessimistic about Trump’s impact, rather points out that the Granite State GOP has never seen a national candidate who has the impact Trump does. “Trump is the first Republican presidential candidate to win Charlestown in years. He won Claremont [another Democratic stronghold], too. He’s bringing out a different voter than other Republicans do.”

And that is the Trump campaign’s entire strategy for New Hampshire which, his supporters insist, is in play in 2020. “Average working people aren’t paying attention to the Ukraine stuff,” Stepanek said. “They’re looking at the economy and at their jobs and they see that things are better. Then they look over at the Democrats, and that’s when President Trump really starts looking good.”