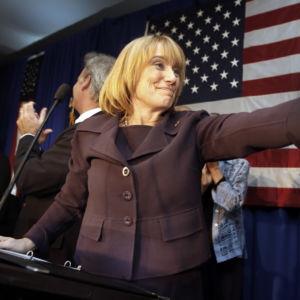 U.S. Sen. Maggie Hassan met with Supreme Court nominee Judge Neil Gorsuch on Monday to discuss issues important to the freshman senator from New Hampshire. Republicans were quick to criticize her statement about the meeting, saying it’s riddled with hypocrisies and calling on her to support a full Senate hearing for Gorsuch.

“I appreciated the opportunity to meet with Judge Gorsuch and to discuss the importance of a strong and independent judiciary,” Hassan said in a statement after the meeting. “In our conversation, I highlighted the critical role the judicial branch plays in protecting the civil rights of all Americans, including a woman’s constitutionally protected right to make her own health decisions. I also emphasized the importance of ensuring equality for LGBTQ individuals, as well as my concerns with the influence of unlimited corporate and dark money in American politics. I will continue to thoroughly vet Judge Gorsuch’s record and views throughout the hearing process.”

Hassan and her Democratic colleague, Sen. Jeanne Shaheen, have expressed concerns about Gorsuch, but have also called for a full confirmation hearing and vote by the Senate.

“It is not in our interest to deny a hearing to Neil Gorsuch,” Shaheen said at a Friday town hall. “That’s what’s prescribed under the Constitution. Let me tell you something. I’m not going to go out and say it’s wrong for them and then say that it’s right for us.”

Last year, the GOP Senate leadership refused to hold a hearing or vote for former President Barack Obama’s nominee, Merrick Garland. There has been some discussion among Senate Democrats who want to filibuster or block Trump’s nominee, similar to what Republicans did to Garland. The GOP has been calling for an “up-or-down” vote on Gorsuch, meaning a direct “yay” or “nay” vote on him without any obstruction.

Hassan and Shaheen have not made a final decision on how they will vote for Gorsuch. His confirmation will require 60 votes, or a cloture vote, according to Senate Minority Leader Chuck Schumer.

“I think it is absolutely appropriate and right for us to do our constitutional duty and have a hearing,” Hassan said.

New Hampshire Republican Party Chairman Jeanie Forrester is going to hold Hassan to her promise, noting that last year, the former governor called for a hearing and confirmation vote for Garland.

“If she doesn’t call for an immediate hearing and vote on Judge Gorsuch, she will be in direct contradiction of her past statements,” Forrester said.

Hassan penned an op-ed in the New Hampshire Union Leader in February 2016, calling on the Senate to hold a hearing and vote to fill the Supreme Court vacancy left by the death of Justice Antonin Scalia

“As is often said, justice delayed is justice denied. A stalled Supreme Court will not move our country forward; it will only exacerbate the deep political divide and gridlock in Washington,” Hassan wrote.

America Rising Squared (AR2), an arm of the Republican opposition research group America Rising, is also pushing for Hassan to call for an up-or-down vote for Gorsuch.

“After spending nearly a year talking about the importance of having a ninth justice on the Supreme Court, Senator Hassan should join Senator Shaheen in calling for an ‘up-or-down’ vote for Judge Gorsuch,” said Nathan Brand, spokesman for AR2, in a statement to NH Journal. “If she instead joins in Senator Schumer’s obstructionist games, it reaffirms her hypocrisy and the fact that she puts her partisan agenda before the interest of Granite Staters.”

There was some confusion earlier this month on Shaheen’s comments about calling for an up-or-down vote. On the Senate floor, she surprised many people when she said on February 7 that she would support an up-or-down vote, going against what Schumer wants. Shaheen met with Gorsuch on February 15.

However, Ryan Nickel, Shaheen’s communications director, took to Twitter to correct the record saying she meant a cloture vote, or 60 “yeas” to be approved.

Ar2 also criticized Hassan’s statement, specifically when she said she has “concerns with the influence of unlimited corporate and dark money in American politics.”

Hassan and Ayotte had the opportunity to avoid big spending by outside groups in the race, but a pledge failed to come to fruition.

Ayotte proposed a “People’s Pledge” similar to one adopted in Massachusetts in the 2012 race between Sen. Scott Brown and Sen. Elizabeth Warren — requiring that a candidate who benefits from a third party ad donate 50 percent of the ad’s total cost to a charity of the other candidate’s choice.

Hassan countered Ayotte, declining to sign the pledge and suggesting limiting each candidate’s spending to $15 million. “This move is politician speak for ‘I do not want to sign the People’s Pledge,’” Ayotte said. The candidates could not come to an agreement and the outside group money flooded into the state.

The Center for Responsive Politics wrote an article about the staggering amount of dark money in the New Hampshire Senate race titled, “Dems in New Hampshire supported by the secret money they rail against nationally.” The article exposed the issue of Democratic candidates being against dark money and outside spending, yet letting it happen anyway.

“If hypocrisy is the coin of the realm in politics, then spending by a Democratic dark money group in New Hampshire’s Senate race could be Exhibit A,” the article stated. “For years, Democrats have blasted Republicans’ use of unlimited secret money in elections. There’s one problem: Hassan herself is receiving millions of dollars in ground support…” from outside groups.

More outside money was spent against Republicans in the New Hampshire Senate race. Nearly $45 million was funneled to the Granite State opposing Ayotte, while $34.8 million went against Hassan.

Gorsuch is making the rounds through the Senate, led by Ayotte, who is helping President Donald Trump’s nominee through the confirmation process. The Senate Judiciary Committee’s confirmation hearings are scheduled to begin on March 20.