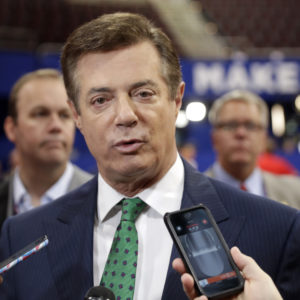 In this July 17, 2016 file photo, Trump campaign chairman Paul Manafort talks to reporters on the floor of the Republican National Convention at Quicken Loans Arena in Cleveland. (AP Photo/Matt Rourke, File)
[IS] Opinions

When the Headlines Don’t Equal Reality

The mainstream media and partisan Democrats (one wonders if there is a need to identify these groups separately) are wedded to the notion that somehow the dastardly Russians not only interfered with the 2016 presidential election, but they did all of this in close and ongoing coordination with the Trump presidential campaign.

For this narrative to have legs, it is necessary to identify actual people who were involved with the Russians and had some role in the Trump campaign. And, this is how it came to pass that the good name of a good man has come into question.

I have known Paul Manafort for more than 40 years. He undoubtedly is one of the smartest, and yes, ambitious people I have known during this long period of time. But, that is not all there is to Paul Manafort. He is a wonderful husband and father, and he is totally loyal to his friends. More than once, when there was not a bit of gain for himself, Paul Manafort has stuck his neck on the line for me. You don’t forget this sort of thing; you certainly do not walk away from him just because he is facing some hard times.

Paul Manafort is a tough operator, willing to push the envelope, challenging long-held ideas and assumptions. That said, during all the years I have known and worked with Paul, he has never suggested, much less done, anything that crossed any boundary of the letter or spirit of the law. How do I know? We live in a world where virtually any activity is surrounded by laws and regulations relevant to what can and cannot be done. Sometimes, it is not entirely obvious what is in compliance and what is not. In each and every effort where I worked with or for Paul, he insisted, as a matter of course, that before actions were taken, everything was reviewed and given a green light by the lawyers. After all, Paul is a lawyer himself. These are not speculative notions. They are hard facts. It is why a half-baked story line filled with inaccuracies and outright lies should not be allowed to rule the day.

The false narrative includes a handful of accusations. Let’s examine them, one by one.

The first accusation is that Paul, along with other Trump campaign officials, “conspired” with the Russians to affect the outcome of the election. The mainstream media is now breathlessly reporting that Paul and Jared Kushner were called into a meeting between Donald Trump, Jr., a “lawyer promising to deliver dirt on the Clinton campaign,” and a handful of others. However, the time spent by Paul and Kushner was brief to the point of Paul not even recalling the event. Even the Washington Post has reported that Paul did not engage in any conversations during the meeting, and was on his cell phone the majority of the time.

It is beyond interesting the same media torturing itself to find a link between the Trump campaign and the Russian government could not muster any energy to investigate the possibility that a meeting between Attorney General Loretta Lynch and former President Clinton at a time the criminal investigation of Hillary Clinton was anything more than the innocent conversation Lynch and Bill Clinton claimed it to be. Very interesting in that later, Lynch directly instructed FBI Director James Comey to describe this criminal investigation as a “matter.” Maybe, just maybe, that might be collusion of a sort. In any event, the first accusation against Paul falls flat on its face.

The second is that, somehow, Paul Manafort was carrying the water for Russian leader Vladimir Putin both in Europe and in the United States. There is only one not-so-small problem with this thought. There is not one iota of truth to it. First, at no point in time did Paul Manafort represent the Russian government or its interests anywhere. This most especially includes doing any work inside the United States. What about the “smoking gun” memorandum where Paul is supposed to have suggested to a Russian businessman that Paul could do much to assist the businessman and the Russian government in America? There already has been considerable reporting to indicate that memorandum is a fraud. More important, not one person can point to one thing Paul Manafort ever actually did inside the United States to promote the interests of the Russian government. Even the “smoking gun” memorandum was related to work to be done more than a decade ago. Is it possible to keep a straight face and argue this had anything to do with the 2016 election? A second accusation bites the dust.

And, when it comes to “collusion,” how is it that the media and liberals treat the 2012 discussion between the then-President of the United States (Barack Obama) and the head of the Russian government (Putin) so lightly? As was widely reported, Obama whispered to Putin that he (Obama) would have “more flexibility after the election.” Other than to encourage Putin to do nothing controversial that might impede Obama’s re-election, what possible other explanation exists for that exchange? Was Obama doing anything other than “colluding” with Putin on how Russia could assist Obama in getting re-elected? Somehow, this actual act of collusion is not any importance to liberals. The hypocrisy and double standards are beyond amazing.

The third part of the false narrative is centered on the idea that the work done by Paul, and his firm, in elections held in the Ukraine in 2012 were part of some secret plan to increase the influence of Russia in the Ukraine. Again, the problem is this is turning the facts upside down. Paul’s work focused on electing candidates from the Party of Regions, led by Viktor Yanukovych, at all levels. At every turn, Paul worked to urge Ukraine to embark on a path to become a member of the European Union (EU)—a policy in complete opposition to what Russia wanted. It is true that after a period of time Yanukovych was forced from office and fled to Russia. However, none of this had a thing to do with Paul. A third accusation bites the dust.

Ah, but what about all of the secret, cash payments Paul received for his work in the Ukraine? You got it. Again, there is not a shred of truth to it. The government in Ukraine has repeatedly stated there is nothing to indicate the ledgers are legitimate in any way, shape, or form. Instead, they are the handiwork of one Yanukovych’s opponents, Serhiy Leshchenko. The reality is that all payments to Paul’s company were made by wire transfers to a bank in Cyprus. As a member of the EU, the bank was subject to the rules and regulations (including disclosure) of the EU. All payments were recorded and reported. Whoops, here we go again, a fourth accusation bites the dust.

Oh, but we cannot forget what Paul did to affect the GOP platform to reflect positions favorable to Russia. Except one thing. Paul did nothing. He did not even know what was in the platform until it had been approved by the delegates of the 2016 Convention. Even the mainstream media has come to accept this as fact. The reality is that Paul never had a single serious conversation with a single Russian official about anything pertaining to the campaign. The single encounter with a lawyer at campaign headquarters does not alter this reality. The fact that Paul and his family were threatened with blackmail by a hacker somehow never makes it into the narrative, never contributes to Paul being more victim that conspirator. This makes five accusations that bite the dust.

Breathlessly, we are brought to “yes, but Paul Manafort recently ‘admitted’ he had been wrong and finally registered under the Foreign Agent Registration Act (FARA) at Justice for what he did in the United States for foreign interests.” Give me a break, please.

Paul registered due to pressure from the Department of Justice to account for a total of three meetings (the most recent in 2012), only one with a federal government official. That meeting was a dinner with long-time friend, Congressman Dana Rohrabacher where Paul urged Rohrabacher to be less supportive of Putin in casual dinner conversation. Instead of engaging in legal wrangling, Paul merely cooperated to his fullest ability as asked.

The filing accounted for the work done by Paul in two elections held in the Ukraine during 2012. The money he received is consistent with what consultants receive for such work. It is even less than what consultants often get for work done on big statewide elections in the states. All work done was performed long in advance of the 2016 elections. So, the idea that the recent filing shows some connection between Paul and anything to do with Russian interests, much less interests associated with the 2016 elections becomes a bad joke. That makes six accusations that bite the dust.

Let me be as clear about this as is humanly possible. Paul Manafort is my friend. It angers me beyond words to see him used as a prop to further the political agenda of liberal partisans and to advance the narrative Trump supporters and the Russian government colluded to impact the outcome of the 2016 election.

One is tempted to ask the media and liberal partisans the same question Joseph Welch posed to Senator Joe McCarthy those many years ago when the senator was part of another witch-hunt. “At long last, have you no sense of decency?” Paul Manafort deserves better. America deserves better.