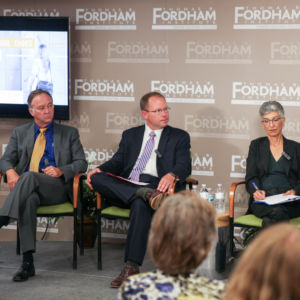 Why High School Choice *In Particular* Is Hard

High costs, unwieldy accountability rules, and the capriciousness of teenagers were all cited as particular obstacles for expanding school choice options at the high school level at an event this week in Washington.

Two conservative education policy think tanks teamed up to host a Tuesday afternoon panel in Washington D.C. that analyzed the obstacles and opportunities available to organizations working to open high schools outside of the traditional public school system: the Thomas B. Fordham Institute and the American Federation of Children (which was previously chaired by Education Secretary Betsy DeVos). The event, which subsequently aired on CSPAN started from the premise that expanded choices for parents and students in education is a worthwhile goal.

One of the panelists, Jon Valant, a fellow at the Brookings Institution, led off by questioning this premise, citing his own research to argue that free-market style choice at the high school level does not always lead to higher quality product offerings. One of the assumptions often made by school choice proponents is that when given the option to pick between a menu of schools, families will flock to the campuses that churn out the highest performing and most accomplished students. The hope then is that the high performing schools attract a larger market share and expand, while the low-performing schools lose enrollment and are eventually forced to close.

While it is generally true that families with students entering middle school chose the best schools, said Valant, the same cannot be said for families with students choosing among high schools. According to a report he co-authored in 2011, Valant found that in some cases the opposite is true. It appears as though sometimes teenagers will seek out and convince their parents to enroll them in less rigorous academic environments—or will at least make their decision based on non-academic factors, such as extra-curricular offerings.

Two of the other panelists present at the event have a direct hand in administering high schools of choice. Zach Verriden, the executive director of HOPE Christian Schools in the Wisconsin area, acknowledged in his remarks that “high school is hard,” when it comes to expanding and innovating through non-traditional school systems. He mentioned that of the eight schools in his network, only one is a high school, and in many cases, the limiting factor is the cost.

Keeping up with the many offerings external to academic performance that Valant cited and that parents and students want in a high school is expensive, he said. “The cost of high school starts going up really quickly,” explained Verriden, “and unfortunately, the dollar amount for charters and particularly choice—whether it is scholarships or tuition or vouchers—usually does not keep pace.”

Kevin Teasely, the president of the Great Educational Opportunities Foundation, who also runs a multi-state school choice network, suggested a unique solution to the cost problem faced by educators working to innovate in the space. Teasley’s group which operates mostly out of Indiana, (a state at the vanguard of the school choice movement), repeatedly highlighted his practice of enrolling high school students in neighboring college courses.

Teasely wondered aloud whether entrepreneurial high schools should consider adopting an “Amazon model” of education. By this he meant that rather than attempting to become a comprehensive high school that offers courses in every area, perhaps school administrators should think in terms of becoming middlemen that link students to third party educational providers that are experts in a student’s desired field of study.

As he himself noted, Teasely and others’ hunger for innovation in the education space often comes up against the difficulties of navigating state regulations and educational accountability systems. For example, Teasely complained that state tests are designed to only evaluate the quality of reading and math classes, so in many cases schools do not get credit for the good work they do in other subject matters.

The final panelist, Tamar Jacoby, the president of a D.C.-based nonprofit called Opportunity America, works mostly with charter schools that focus on career and technical education offerings. She explained that each of the above challenges, having to do with accountability, student choice, and cost, are magnified in her field. She used the example of an aerospace-oriented school that has to pay to set up labs, forge partnerships with employers that offer work-study, attract students interested in more narrow subject matter offerings, and still prepare students to achieve on high stakes state assessments in traditional subject areas.

School choice was already a divisive and complicated issue before the nomination and confirmation of Education Secretary Betsy DeVos. One final challenge that hung over the panel’s discussion but was not addressed directly, is the complexity of getting school choice legislation passed in such an intense political environment. With the teachers’ unions and groups on the left arguing that vouchers are rooted in racism, and charter schools experiencing a dip in popularity, one might expect that the headwinds laid out on Tuesday for school choice proponents working at the high school level will only get more difficult to manage.