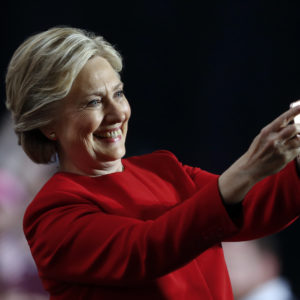 “Hillary Clinton is up to something.”

So says Michael Goodwin in the NYPost, who believes that all the political signs point to a potential 2020 run by the failed, two-time candidate.

Goodwin’s case is pretty direct: There’s no clear front-runner, she’s got a seasoned campaign team, she’s raising tons of money and giving it to progressive groups (the same BernieBro’s who opposed her in 2016’s primary), and the large field would let her take advantage of the “Trump” dynamic in the primary:

“A crowded, diverse field diminishes the chances of anyone knocking her off. Recall how Trump outlasted 16 GOP rivals by having a committed core of supporters that grew as the field shrunk. Clinton could be in a similar position — unpopular among many, but also unbeatable by a single opponent,” Goodwin writes.

And perhaps most relevant of all: She’s Hillary Clinton. Does anyone doubt she goes to bed every night with the phrase “Madame President” haunting her dreams? As Goodwin notes: “Doubters should recall the line about pols who get the presidential itch: There are only two cures — election or death.”

On top of the NYPost’s data points, there’s the fact that Hillary just won’t stop talking. She’s on TV almost as much as she was during the campaign, and she’s generating headlines at least once a week. She’s scheduled to speak at the American Federation of Teachers’ national gathering in Pittsburgh this Friday.

Who was the first national union to endorse Hillary in the 2016 Democratic primary? The AFT.

A new Vox Pop Poll finds that 52 percent of Democrats would consider voting for Hillary in 2020. That put her ahead of second-tier candidates like Sen. Kamala Harris (CA) and Sen. Cory Booker (NJ), but behind the big names like former Vice President Joe Biden, and Senators Bernie Sanders (I-VT) and Elizabeth Warren (MA).

The most interesting number in the poll, however, is 35. That’s the percentage of Democratic primary voters who say they wouldn’t consider supporting Hillary–twice as high as any other major candidate.

And then there’s the New Hampshire problem. It’s very unusual for a presidential candidate to lose a state they’ve previously won.  Hillary beat Barack Obama in the Granite State in 2008, but then lost–badly and embarrassingly–to the (then) renegade candidacy of Bernie Sanders. The most famous Democrat in America got less than 38 percent of the vote against a socialist in a state she’d previously won. To put that in perspective, Pat Buchanan got a higher share of the GOP vote against a sitting president than Hillary Clinton got against a Larry David lookalike.

The trendlines appear to be going the wrong way for Hillary Clinton. She’s rarely mentioned by the Democrats running to replace Rep. Carol Shea-Porter in the First Congressional District–many of whom were proud Sanders’ supporters.

Still, she’s got the fame, the money, the organization and the Establishment.  When people ask “Why would Hillary run?”, the better question is: