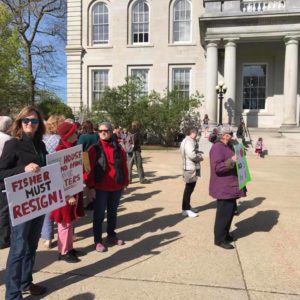 In an unusual move, the New Hampshire House of Representatives voted to review controversial comments made online by two lawmakers. Yet, Republican leaders aren’t expecting the committee to find that they violated any House ethics codes.

It started as an inquiry into Rep. Robert Fisher, R-Laconia, and comments he made in an online forum that were construed as misogynistic, but Republicans successfully added Rep. Sherry Frost, D-Dover, in the inquiry for tweets she wrote earlier this year that some found “offensive.”

Before the House met in their regularly scheduled session on Thursday, it was anticipated that House Democratic Leader Steve Shurtleff would bring up a motion for a House committee to investigate Fisher’s comments.

“At any time any member says anything or does anything that holds this body in disrespect, it affects each and every one of us,” he said on the House floor.

Fisher was identified as the creator of a a Reddit forum called “The Red Pill” in a report from The Daily Beast last week. His posts on the message board garnered criticism for being disrespectful toward women and normalizing rape culture. He admitted to the comments, which were made as far back as 2008, but said they were taken out of context.

Republican Gov. Chris Sununu and New Hampshire Republican Party Chair Jeanie Forrester have called for his resignation, but Fisher insists he will not step down.

Frost posted tweets earlier this year that said more terrorism is perpetrated by “white men who claim Christianity than by Muslims in the USA.” She also tweeted, “The people (read; men) telling me to ‘calm down’ & ‘not take it so hard’ are making me homicidal.”

The NHGOP criticized her for the tweets, calling her a “radical” and “a threat to her colleagues.”

“All representatives should be held to the same standard,” said Rep. Victoria Sullivan, R-Manchester, who put forward the amendment to include Frost. “This body cannot pick and choose who they support and who they do not.”

The House voted 182-180 to include Frost in the inquiry and then approved of the investigation of both lawmakers by a 307-56 vote, with Fisher and Frost voting in favor of the review.

“I think the truth will be out at the hearing,” Fisher told the Concord Monitor. Frost said she has nothing to hide.

The Legislative Administration Committee’s reviews will be limited to comments made by the two lawmakers during the current legislative session, which means Fisher’s previous posts will not be included, but Frost’s tweets will be reviewed.

After that, the committee will make a recommendation to the full House for each lawmaker. The committee could recommend that no action should take place, or that the representatives should be reprimanded, censured, or expelled. The House will then vote on the recommendations.

“Referring this matter to the Legislative Administration Committee will allow for an investigation into Representative Fisher’s involvement with this forum since his election to the New Hampshire House,” Shurtleff said in a statement. “As elected officials it is our duty to act with honor both inside the State House and out, and I am confident that the Legislative Administration Committee will give this serious matter the consideration it deserves.”

His statement didn’t include any comments about Frost, though.

Some lawmakers criticized Republicans for including Frost in the inquiry, saying the two lawmaker’s comments do not equate to equal treatment. New Hampshire Democratic Party Chairman Ray Buckley took to Twitter to criticize the decision.

Yet, House Speaker Shawn Jasper admitted that he doesn’t believe the committee will find that the lawmakers violated any ethics codes.

“I don’t think we’ve ever done anything quite like this,” he told the New Hampshire Union Leader. “Normally there would be something that falls under the ethics guidelines, and there’d be a complaint made by somebody and it would go to the ethics committee.”

Some lawmakers questioned why they spent time debating the issue.

@WMUR9 House votes to spend time investigating those who drop F-bombs on twitter. #nhpolitics don't we have more important things to do?

“This is being used as a political football,” he said. “We need to have some more harmony in this body.”

Protesters lined the hallways of the State House and gathered outside on the plaza to protest Fisher’s comments. A protester’s sign said, “Rep. Fisher: This feminist says resign!” Another read, “Rape culture: He isn’t a symptom, he is a disease. Fisher must go.”

Fisher’s review hearing will begin on Tuesday, with Frost’s review to follow on Wednesday.