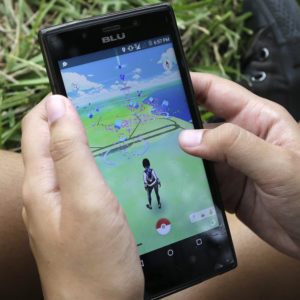 Privacy and public safety aren’t lawmakers only concerns about the wildly popular mobile game Pokemon Go, according to a letter from House Democrats Wednesday, asking the game’s developers about user reports of blowing through monthly data plans in days.

“While Pokemon Go has been highly successful, the game has raised concerns,” Democrats on the House Energy and Commerce Committee wrote to the CEO of Niantic, the games’s developer, in a letter released Wednesday. “We are writing to better understand what measures Niantic has undertaken to ensure consumers are informed of Pokemon Go’s effect on their mobile data usage.”

The augmented reality game requires players to access it outside of the home, often while traveling away from a consistent wifi connection in order to capture Pokemon, check-in at landmarks to find items and engage with other players.

Facilitating those essential functions requires a constant stream of real-time smartphone location data when the app is open.

“In addition to the issues related to the game being played in inappropriate locations, safety, and privacy, recent reports suggest that playing Pokemon Go could exhaust a consumer’s available monthly mobile data,” the letter reads.

According to Android Central the game uses less than 20 megabytes of data per hour of play, meaning an active user putting in three-plus hours daily could use two gigabytes per month — the average entry level data plan offered by most wireless carriers.

“Users have reported maxing out their monthly data usage plans within a week of playing and have complained of eating through an entire family plan within a few days of playing,” lawmakers wrote.

Questions and complaints from users about the impact of the game’s data usage prompted lawmakers to ask Niantic a series of questions related to the app, including practices the company uses to minimize player data use, if the app alerts users to its potential to use data, how it’s working with wireless carriers to ensure users aren’t hit with unexpected overage charges and actions the company is taking if they are.

Committee members including ranking Democrat Rep. Frank Pallone of New Jersey gave the company until Aug. 9 to submit its answers.

Rising data use by the app hasn’t gone unnoticed by carriers, and to the benefit of T-Mobile subscribers. While Verizon says the game makes up less than 1 percent of all its network traffic, CEO of the significantly smaller ‘uncarrier’ John Legere said earlier this month the number of Pokemon Go users on its network doubled in as little as four days, quadrupling their data use.

The carrier has since exempted Pokemon Go data use from users’ monthly data caps in accordance with its Binge On zero-rating program, which also exempts data used by Netflix, Hulu, HBO and other apps boasting heavy data use.

The Federal Communications Commission is conducting an inquiry into zero-rating programs like Binge On over concerns they may violate the agency’s recently upheld net neutrality rules, which forbid internet service providers — a definition that now includes wireless carriers — from favoring certain content over other content.