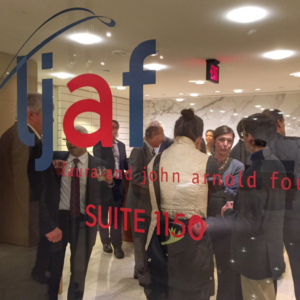 The Laura and John Arnold Foundation hosts a reception at its Washington, D.C. office. (photo via the foundation's Twitter page)
News

High-risk opportunities with big-time payouts: That’s how John Arnold got rich as an investor, and now he’s using that same strategy to give his money away.

John and Laura Arnold may not be headline-grabbing philanthropists who’ve become household names like Bill and Melinda Gates or George Soros, but the couple is creating major impacts with their charitable giving by treating every new philanthropic venture the way John once treated his bets on Wall Street: Watching for risky opportunities that offer an outsized payoff.

In 2016 alone, according to filings, the Laura and John Arnold Foundation held $2 billion in assets and awarded grants worth $176.8 million. The result has been a philanthropic empire that, while sometimes stoking controversy, has made a clear and tangible impact on the sectors of society it has targeted.

John Arnold started his career as an oil analyst at the now-defunct Enron Corporation, where he eventually became a top trader on the company’s Natural Gas Desk. When Enron collapsed in 2002, Arnold launched his own hedge fund, Centaurus Financial, growing it and his own net worth above $1 billion. That success came thanks to some risky bets along the way. In 2006, for example, Arnold lined up his hedge fund on a high-risk position in the energy markets opposite another hedge fund. Arnold won, and the result was an overall portfolio return for investors of an astonishing 317 percent.

One year later, John Arnold was the world’s youngest billionaire.

Arnold retired in 2012 at age 38 to start the Laura and John Arnold Foundation with his wife, a former corporate lawyer. At the time, a profile published by Wired described John Arnold as a young philanthropist eager to make a concrete and substantial difference in the world, and unafraid to disrupt the world of philanthropy in the process.

The Arnolds essentially approach philanthropic ventures the way any Wall Street veteran would: they’re attracted to risky bets — as shown in their support for pretrial justice reform, increased soda tax, police surveillance support, and—despite the dangerous #MeToo-era politics—a gamble on a donation to a man accused of sexual abuse. The Arnolds are using their charitable giving to disrupt areas of society that are underserved or ignored by others.

In fact, they have had a lot to say about their fellow billionaire philanthropists. They joined with nearly 200 other philanthropists in signing the Giving Pledge (launched by Bill Gates and Warren Buffet), a promise to give most of their wealth away. But according to Wired, the Arnolds also criticized other philanthropists for being too safe in their giving.

Laura Arnold told Wired that their foundation seeks to be based on “thoughtful failure and fantastic success.”

That comment is very revealing about the choices the Arnolds have made over the past six years.

A review of the foundation’s website shows the Arnolds care deeply about data-driven solutions. Most of the issues they’ve chosen to tackle rely on their own data and research, rather than re-purposing work done by others.

For example, the foundation is currently conducting an investigation into gun violence in order to better inform policymakers. And the Arnolds seek out leading experts to drive these efforts forward. The Arnold Foundation recruited Jeremy Travis, president of the John Jay College of Criminal Justice of the City University of New York, to oversee criminal justice initiatives. Travis, who was a former clerk to then-U.S. Court of Appeals Judge Ruth Bader Ginsburg, has extensive experience in criminal justice as a former deputy commissioner of the New York Police Department and the architect of the city’s assault weapons ban.

The Arnolds practice what they describe as “evidence-based policy” and “research integrity”–two sides of the same coin, they believe.  In the Arnolds’ view data, not ideology, should drive policy and scientific research. To combat bad science and bad policy, the Arnolds have launched several “policy labs” around the country in partnership with local governments and universities in an attempt to gather more trustworthy data on local issues.

This approach is not without its critics. In the area of criminal justice reform, for example, the Arnolds have recently launched nationwide their Public Safety Assessment tool (PSA), an algorithm which uses nine factors to help evaluate whether a person accused of a crime should be released pretrial.

While using risk factors like prior violent convictions and prior failure to appear in court may help judges sift through which individuals should be detained and which should be released, civil rights advocates fear that using federal criminal justice data — which many believe is tainted by a system that engages in racial profiling — means that the PSA will only perpetuate racial discrimination. Others have pointed to those being released on the tool’s recommendation committing additional crimes while awaiting trial.

Controversy follows many of the Arnolds’ other initiatives as well.

The Arnolds are major backers of charter school initiatives and school choice, but they were criticized when that support led them to back a leader in the charter school movement who was dismissed from his own charter school program over multiple sexual abuse accusations.

Recognizing glaring inequalities and problems with pensions in the U.S., the Arnolds launched a pension reform initiative that emphasizes both fiscal responsibility and increased personal savings by retirees, which has drawn very sharp criticism from federal employees and politicians.

The Arnolds also backed the controversial soda tax in many states, most notably Pennsylvania. According to the Philadelphia Business Journal, they gave $500,000 to the City of Philadelphia’s legal defense of the soda tax in 2017, following the lawsuit from Big Soda.

The foundation has also pushed data-driven models to assess pricing for drugs, drawing ire from the pharmaceutical industry and raising questions about the use of their data model to determine what drugs are going to be most effective for a patient.

Besides giving Johns Hopkins University $450,000 to hand out free glasses to students in Baltimore, Maryland, the Arnolds also gave $360,000 to the Baltimore Police Department’s surveillance initiative, which involved camera monitoring of city residents, without telling the mayor.

Given the Arnolds’ statement to Wired, the risk and the controversy involved in their philanthropic efforts is all part of the mission. The real question is: how effective is it?

In pretrial justice reform, the Arnolds’ PSA has produced mixed results. The Arnolds are working to make the PSA available nationwide, but there is still very little data on its efficacy and whether it’s accomplishing what the Arnolds want it to accomplish — a fairer criminal justice system. This  push to take the PSA nationwide before the evidence is in doesn’t seem to align with their claim to pursue data-driven results.

Another source of criticism is the Arnold’s political partisanship.

The Arnolds were top donors to both of Barack Obama’s presidential campaigns, and they have given extensively to the Democratic National Committee and Democratic Senatorial Campaign Committee. They’ve teamed up with other liberal philanthropists like Michael Bloomberg on the soda tax, George Soros on the Brennan Center for Justice, and they back Patients for Affordable Drugs, an organization managed by former Clinton and Obama staffers.

The Arnold Foundation have also turned to Democratic politicos for guidance in their giving. Firms headed by Obama strategists Robert Gibbs, Ben LaBolt, and Joel Benenson were collectively paid $1.5 million in 2015-2016, the two most recent years for which disclosures are available.

These liberal bona fides have not protected the Arnolds from occasional criticism by the Left, particularly when they joined the libertarian Koch Brothers as lead proponents of public pension reform. The Arnolds’ efforts on criminal justice reform have taken heat from all sides: Civil rights groups complain that the Arnold Foundation’s data-driven approach is fundamentally unfair, while law-and-order conservatives point to every incident of a defendant who commits another crime while out on bail.

The Arnolds believe that philanthropy should be “aggressive, highly goal-oriented … entrepreneurial, not institutional or bureaucratic … seek[ing] transformational change, not incremental change.”

It’s a hedge fund approach to philanthropy. The jury’s still out on whether it will work.

The Arnold Foundation declined to be interviewed for this story.