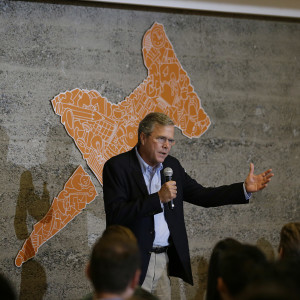 How Jeb! Would Dismantle Net Neutrality

A Jeb Bush presidency in 2016 would mean a drastic overhaul of one of the biggest tech initiatives of the Obama administration, according to a policy proposal dropped Tuesday from the former Florida governor naming net neutrality as one of the biggest targets of regulatory reform in a potential Bush White House.

“[L]eaders in Washington have increasingly fallen prey to a ‘regulators-know-best’ mentality, which drives them to dictate choices and control the economy,” Bush wrote in a Medium post Tuesday. “This is the basis for President Obama’s infamous and sometimes unconstitutional ‘phone and pen’ strategy to govern through regulation, disregarding Congress and the states.”

An example of that strategy, according to Bush, was Obama’s public announcement last November calling on the Federal Communications Commission to adopt strong net neutrality rules over broadband and wireless Internet service providers (ISPs) — a move FCC Chairman Tom Wheeler indicated he was moving away from at the time.

“The Federal Communications Commission’s net neutrality rule classifies all Internet service providers as ‘public utilities,’ subjecting them to antiquated ‘common carrier’ regulation,” Bush wrote. “Rather than enhancing consumer welfare, these rules prohibit one group of companies (ISPs) from charging another group of companies (content companies) the full cost for using their services.”

According to Pai, Republicans in Congress and the broadband industry, it also gives the FCC the power to regulate the rates ISPs can charge for service, which, along with other new regulations, disincentivize providers from growing and upgrading their networks. The same groups claim that lack of incentive threatens to slow the adoption of newer, faster technologies like fiber, while slowing down network expansion into underserved rural areas.

“Small broadband operators — like KWISP (475 customers in rural Illinois) and Wisper ISP (8,000 customers near St. Louis, Mo) — have declared under penalty of perjury that the net neutrality rule has caused them to cut back on investments to upgrade and expand their networks,” Bush wrote.

After hearing public comment on the issue for months last year, Wheeler drew up the rules and released them to his fellow commissioners weeks before a partisan vote to adopt in February. The order wasn’t released to the public until after it was already adopted — a common FCC rulemaking procedure Republicans are now seeking to change via new legislation in Congress, aimed at making the agency more transparent.

“Agencies today make far more laws than legislators,” Bush wrote. “But unlike courts and legislators, regulators conduct their deliberations in relative obscurity, often outside of the public’s view and effectively accountable to no one, not even the president.”

If elected, Bush said he would tackle the current regulatory environment with a host of executive proposals, including ending “sue and settle” agreements between agencies and special interests, in which the two negotiate and settle without public or stakeholder input.

He added regulators would be forced to adhere to a regulatory budget, requiring cuts to existing regulations to offset the cost of new ones. Bush would also impose a regulatory freeze on agencies until new regulations were approved by a Bush appointee, and he would issue an executive order to give agencies guidelines for adopting new regulations.

In addition to net neutrality, Bush said he would target other Obama administration red tape including the Dodd-Frank financial sector reforms, carbon rules mandating switches to renewable energy and Environmental Protection Agency rules governing the use land for farming.

Tuesday’s proposal is the second round of tech-focused policies aimed at criticizing the Obama administration and increasing the U.S.’s economic output via regulatory reform by Bush’s stated goal of 3 percent in the next 10 years (the first round focused on cybersecurity).

RELATED: Bush Says He’s Willing to Do What Obama Won’t on Cybersecurity

Democrats, the tech industry and net neutrality advocates submitted briefs in support of the FCC to the D.C. Circuit Court of Appeals Monday ahead of a court battle to decide the legality of the rules later this year.