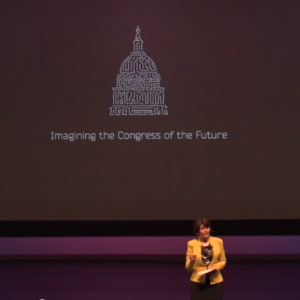 The call for a tech-savvy government is spreading from the White House to the halls of Congress, according to House Republican Conference Chair Cathy McMorris Rodgers, who addressed a tech conference in New York this weekend to call on government to function more like a Silicon Valley startup than a bureaucratic agency.

“Innovations in technology have the potential to revolutionize the way citizens interact,” McMorris Rodgers told the crowd at the Personal Democracy Forum Friday. “Technology can solve problems and improve lives by changing government’s approach to public policy.”

During McMorris Rodgers’ “Imagining the Congress of the Future” speech at the conference, which discussed the way technology and the Internet can influence democracy, the House Republican chair said interacting with Congress “is more similar to the DMV than it is to Uber.”

“The same creative thinking that launched Uber and Lyft should be used to spur tax reform,” McMorris Rodgers said. “The same innovation that leads to new diabetes and cancer drugs should be adopted when Congress envisions a 21st Century health care system.”

The House GOP chair said that Congress’ history of functioning reactively instead of with vision won’t suffice in the age of the Internet, with government already failing to keep pace with overseeing and integrating technological innovation.

“So what we’re seeing is a 19th Century institution often using 20th Century technology to respond to 21st Century problems,” McMorris Rodgers said. “In order to more effectively engage people in the political process, we needed to make it personal. We needed to bring the same innovative approach to Capitol Hill that we’ve seen in tech startups and companies across America.”

The Washington state Republican added she was committed to leading the charge in bringing Congress “up to speed.”

“I want to be a positive disruptor on Capitol Hill,” McMorris Rodgers said. “I want to bring the innovative mentality of the Pacific Northwest and Silicon Valley to Washington and use it to change how government views outreach and problem solving.”

The sentiments echo those of recently announced 2016 Republican presidential contender Carly Fiorina, the former Hewlett-Packard CEO who has managed to take her Silicon Valley experience and vision for a serious tech update to government to gain a favored underdog spotlight.

“It’s important to have someone in the White House who has a fundamental understanding of technology, a fundamental vision for how technology can be used,” Fiorina told the crowd at another tech conference in New York last month. “Technology is a disruptive force; maybe we should use it to disrupt the status quo.”

For Fiorina, part of that disruption includes shaking up the 2016 presidential field, and not just on her side of the aisle.

“I’ve taken hundreds of questions — whether about hot dogs or my personal finances — and I think it’s all fair game,” Fiorina said in a statement last week about her recently disclosed finances, which revealed a net worth of $59 million for the GOP candidate and her husband.

“I think leadership of any kind requires trust and transparency and voters should demand no less from their political leadership in government,” Fiorina said.

The comment was a not-so-subtle swipe at Democratic frontrunner Hillary Clinton, who routinely withholds from taking questions from the press, and has made misleading statements about her wealth, while the Clinton family’s foundation has been slow to make financial disclosures about its worth and donors.

Required by law to run for public office, the financial disclosure only mandates candidates reveal their assets and income within a range, but Fiorina went a step further, disclosing an exact figure for her net worth and two tax returns from 2012 and 2013.

Fiorina has made $786,000 for public speaking events since 2014. The company has filed an extension for the tax year, but said in a note attached to the disclosure Fiorina plans to donate her fee for two upcoming speeches — each worth $48,000 — to charity.

The bulk of the couple’s wealth is in their stock portfolio and real estate. The Clintons, meanwhile, have taken in $30 million, mostly from public speaking, since the start of 2014 alone, according to a financial disclosure from the Clinton campaign last month.

A campaign representative said the Clintons paid an estimated more-than 30 percent tax rate in 2014, and the couple’s total asset disclosures have ranged from $11.3 million to $52.7 million since 2014.