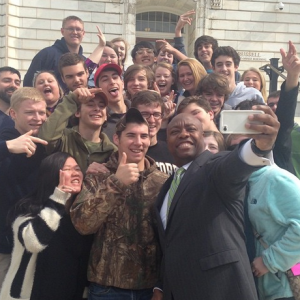 Sen. Tim Scott (R-SC) taking a selfie with a group of students

For those who follow American politics and its trends, the results were somewhat predictable.

On the endorsement, one might ask, what is the news here? Rushern Baker is an African American. So too is Donna Edwards, while Chris Van Hollen is a white man. The article highlighted the tough questions posed to Baker about endorsing a white man over a black woman. It referenced a past endorsement by Baker in the election for Attorney General where the County Executive had preferred Brian Frosh (a white male) rather than Aisha Braveboy (a black woman).

The entire article insinuated that it is a near scandal that Baker would dare to prefer a white candidate to a black candidate, given that Baker was also an African American. The “right thing” to do, it seems, would be to stick to endorsing other black candidates, period.

Together, these two stories give me great pause and elevate a standing concern: Identity politics threatens more than electoral politics. It is bad for America.

In 2015, never would a white politician be called out for preferring an African American candidate over a fellow white. That is a good thing. The notion that an “identity marker” should supersede larger qualifications is never a rational argument. But taking a step back, it is clear that this phenomenon originates from a considerable element of liberal double standards.

For example, former Congressman Jim Kolbe of Arizona – a Republican – was one of the first openly gay politicians. There is scant record of applause for him or the Republican Party’s “tolerance” from the liberal community.

On the same day as the Maryland story ran in the Post, columnist Harold Meyerson contributed a piece titled, “Lincoln’s party no more.” Not content to criticize Republicans for policies he opposes, Meyerson literally marries the modern GOP to the Confederacy. “It is the lineal descendant of Lee’s army, and the descendants of Grant’s have yet to subdue it.” Meyerson conveniently disregards that in South Carolina, voters have elected Republican Senator Tim Scott – an African American – and Republican Governor Nikki Haley – a woman of Indian descent.

Bringing back the two news stories, one must ask then – if identity politics comes ahead of all other considerations, and the white percentage of the population continues to shrink, how long before a conservative politician finds a clever way to say: “If you are not a member of some group liberals have identified as special and in need of special benefits, in particular benefits and preferences given by the government, and you don’t vote for the conservative, the Republican, you are simply stupid. When are you going to say enough is enough? When are you going to say that we count too?”

I know that in the past the GOP came dangerously close to saying these sorts of things, and even worse. I realize that as a general proposition whites have an advantage over every other group in the country. That is not the point.

Instead, it is that unless and until we can all agree to reduce the role of identity politics, we are headed to a place where further polarization and divisions probably are just a matter of time. Unless we can agree that if including more minorities in the process is a good thing, then it is a good thing and ought not to be a source of liberals ignoring it or demeaning conservative minorities.

America needs individuals, structures, and forces that will unite us, not divide us. Questioning endorsements based on the race of the endorsee is not helpful in this regard.