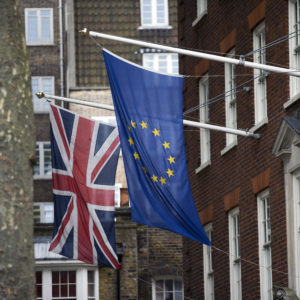 A European, right, and Union flags are displayed outside Europe House, the European Parliament's British offices, in London, Wednesday, June 22, 2016. Britain votes whether to stay in the European Union in a referendum on Thursday. (AP Photo/Matt Dunham)
News

On Wednesday, less than 24 hours before the United Kingdom began its historic vote on whether to leave the European Union, Sen. Jeff Sessions, R-Ala., and the executive director of the Federation for American Immigration Reform (FAIR) both told InsideSources the British experience underscores the value of national sovereignty.

Sessions pointed to populist frustration in the U.K. with E.U. policy allowing unprecedented levels of immigration across open borders — a key talking point of the “leave” campaign in Thursday’s referendum.

“It just goes to show that people aren’t ready to give up their sovereignty and the institution that they have most confidence in, their nation,” the senator said. “When this flow of massive illegal entry in Europe occurred, you would have thought the European Union would be the perfect institution, representing all the governments, to create an effective European response. But they totally failed. … It’s pretty clear that the European Union not only didn’t help, but made actually made the situation worse in Europe.”

Despite these strong opinions, Sessions doesn’t have a public stance on “Brexit.” In fact, he and two Republican Senate colleagues wrote a letter to President Barack Obama this week telling the Democrat the United States “should take no official position” on the vote.

Yet in criticizing the president for aligning himself with the “remain” campaign, Sessions pushed back on an argument against Britain leaving they E.U. — the notion that the move would damage the U.K.’s special relationship with the U.S.

“Regardless of the outcome of the referendum, citizens of the United Kingdom should know that we will continue to regard our relations with the United Kingdom as a central factor in the foreign, security, and trading policies of the United States,” he and his colleagues wrote. “We await the decision of the British people in the certainty that their vote, while it may open new opportunities for cooperation with our British friends and allies, will not diminish any of our vital ties.”

Like Sessions, FAIR executive director Bob Dane isn’t taking a position on the E.U. question. He said he’s not a “Brexit” expert. Still, the advocate drew parallels between Europe and America on the immigration issue.

“A lot of the European countries, along with the United States, have not identified the overriding true purpose and principle behind immigration,” he said. “It’s not for the Democrats to create a massive voter drive on the left. On the right, it shouldn’t be designed by big business to throw the American worker out the front door while foreign workers and illegal aliens are working jobs through the backdoor. The principle of immigration is to serve the broad national interest, whether it’s Great Britain or it’s the United States, and it’s okay to adjust it. The idea of immigration constantly expanding — there’s no historical precedent for it.”

Moreover, Dane said, Europe demonstrates that high levels of immigration don’t necessarily serve a broad national interest. “We’re always going to have immigration. Immigration has defined who we are. We should always be welcoming to immigrants. But this constant push for more, more, more … really pads the pockets of the fat cat elites in the political infrastructures and in the industrial complex.”

Given its populist and anti-immigration bent, the “leave” campaign has been compared to the movement behind the presumptive Republican presidential nominee in America — “the Trump campaign with better hair,” as one former British official put it.

Trump himself said on Wednesday that he’s inclined toward “leave” — he’d previously given an even stronger endorsement of that position — but qualified his statements in an interview with Fox Business. “I don’t think anybody should listen to me because I haven’t really focused on it very much,” he said.

Despite predictions that a “leave” vote could upend the entire Western political order, Trump said the referendum “doesn’t have any effect on me.”